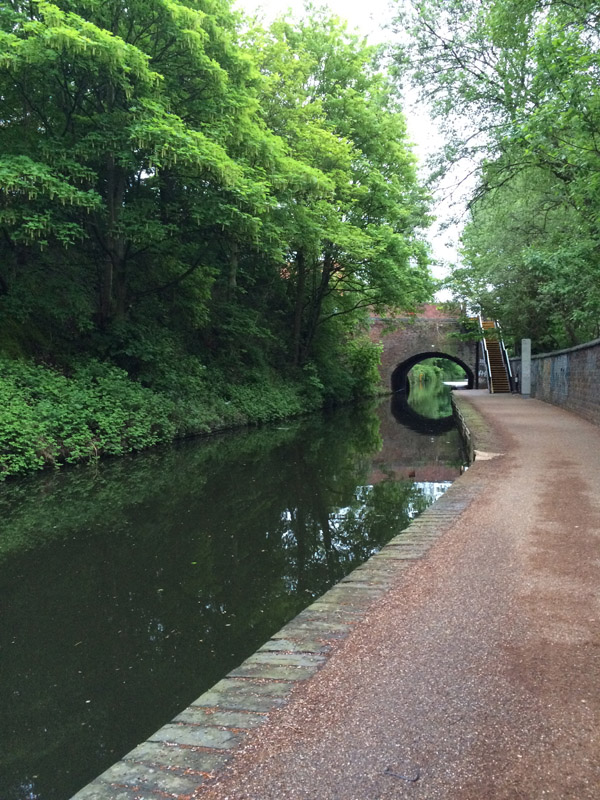 After a neato train ride from Edinburgh we arrived in Birmingham, excited to check out our new home. And boy it did not disappoint. We were pleasantly surprised that our apartment was directly on the canals and I mean directly, like I could step out on the patio and put my feet in the filthy canal water! Our place was also located very central to lots of cool Birmingham things.

I know what you’re thinking, “that’s great Britt, but why would you stay in Birmingham?” … “why not London, Liverpool, or literally any other English town?” Well, I know Birmingham isn’t really known for tourism and it honestly wasn’t my first choice, but we wanted to go to the UK Games Expo which is in Bham and we didn’t want to move twice in a month, so we were like let’s check out England’s “second city.” I love doing the simplest of shit so I really wasn’t worried about being bored. Plus England is well connected with train business making it easy for us to go on out of city adventures.

Any concern I had about staying in Birmingham was almost instantly washed away after our arrival. I fell in love. I love the gravelly accents, the sincerity of the people I interacted with, the walking paths along the canals, the markets, the pubs, the all of it.

While Brum might be England’s second city, it’s first in my heart. Let me show you some of my most loved things.

Our street traffic was adorable canal boats, geese, and ducks. 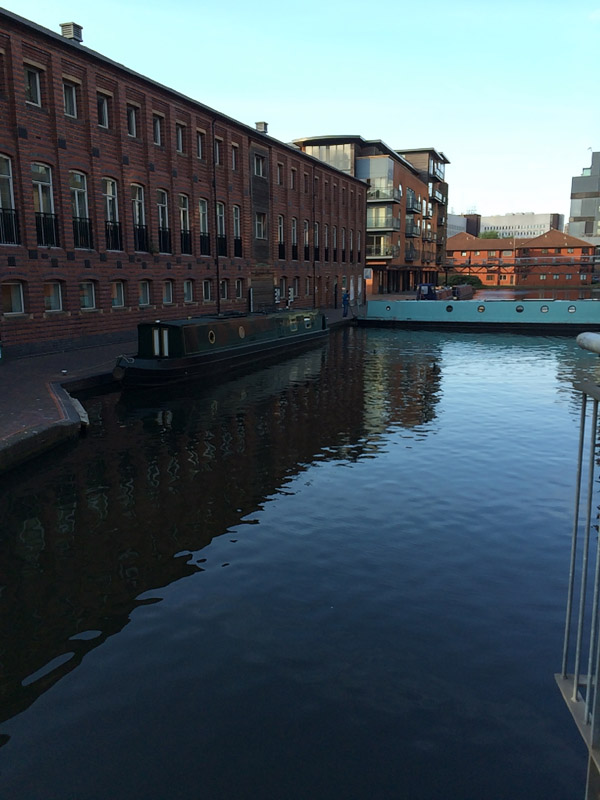 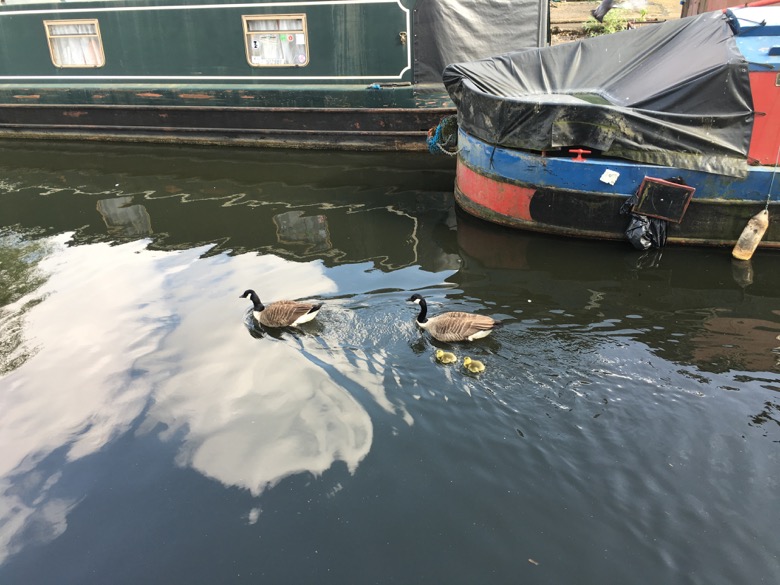 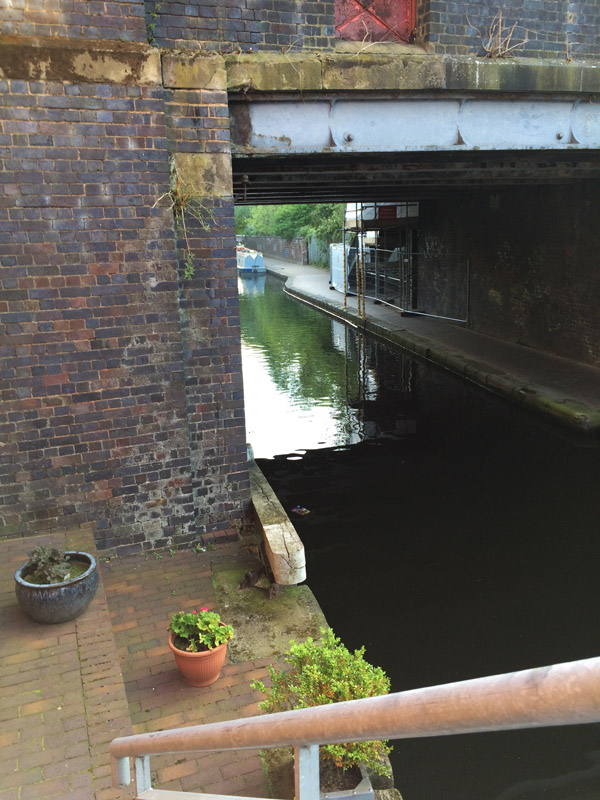 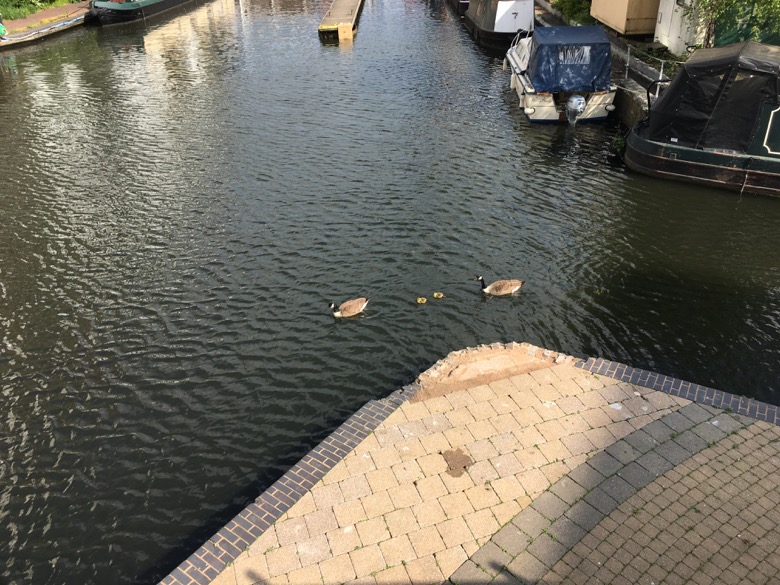 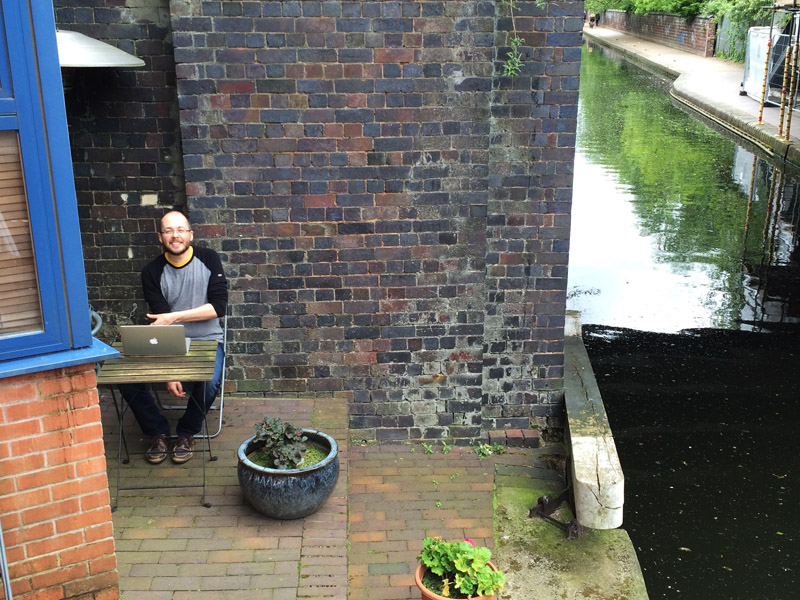 The central markets is one of my fav spots for people watching and fresh food grabbing. 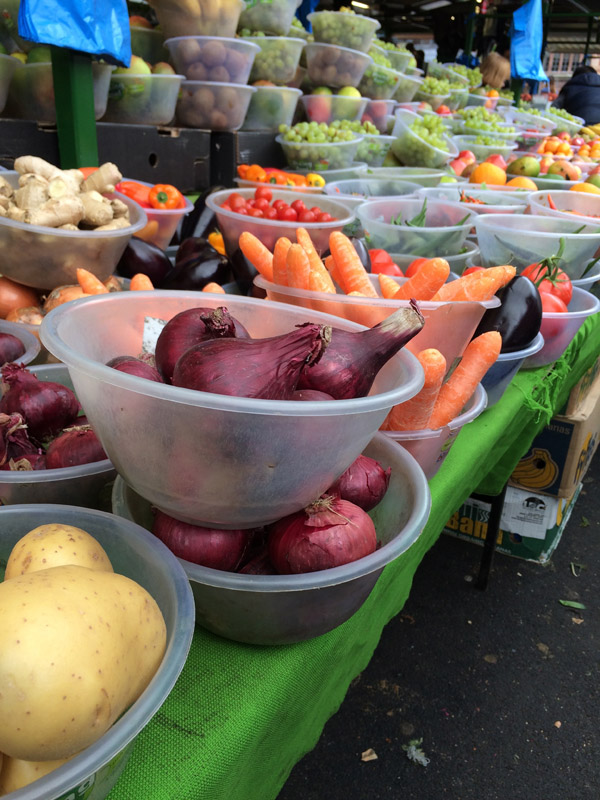 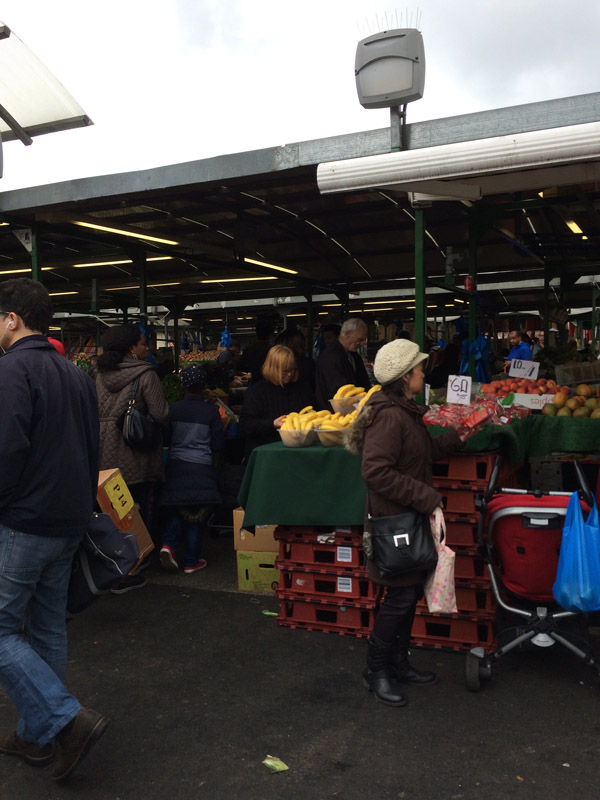 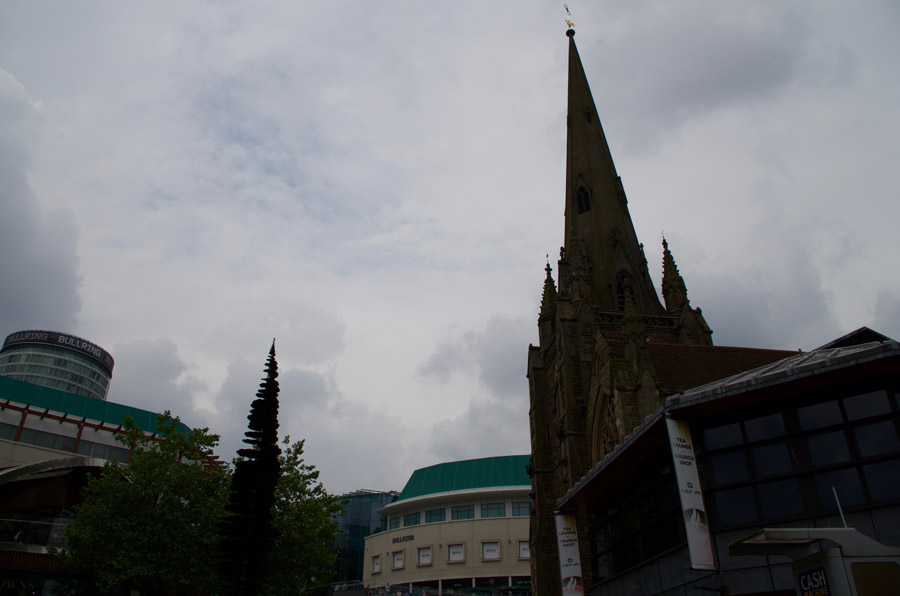 I learned at the museum that the Bull Ring markets were always there. Since humans lived in England there was always a market in this area. It was always a centre for trade. I just think that is so cool! Now the Bull Ring is part farmers market, part rag market, and part super high end shopping mall. There is also a big ol’ church up in there.

We also enjoyed the museum and art gallery at Victoria Square. The museum has lots of great history on Birmingham and surrounding area. 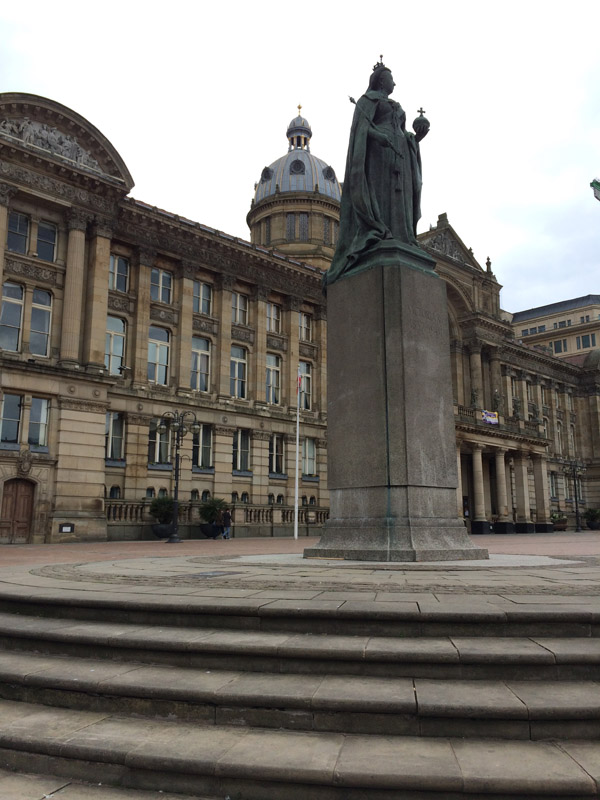 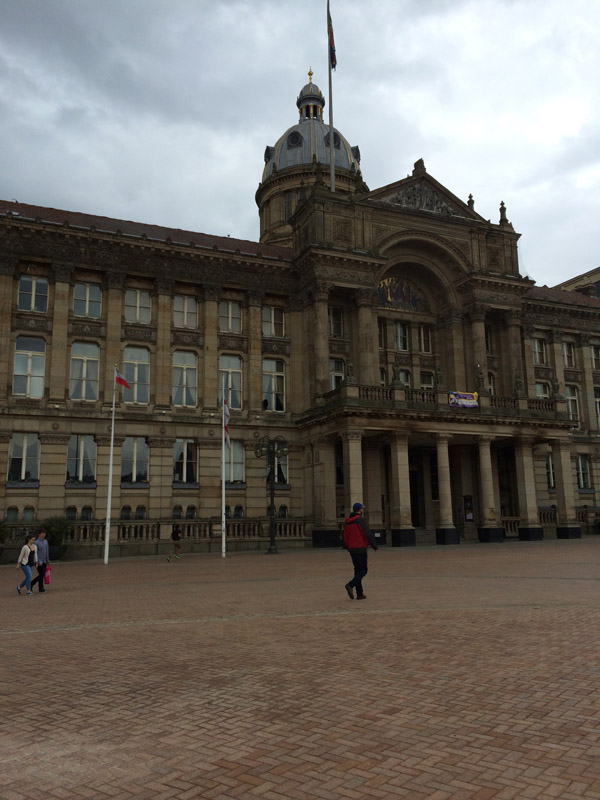 The old pubs are also a fav. Many older buildings had been destroyed during the war making Birmingham much more modern than you might expect. Plus Birmingham’s major growth started in the early 1900’s similar to North America, which is probably what made the city feel more like home. 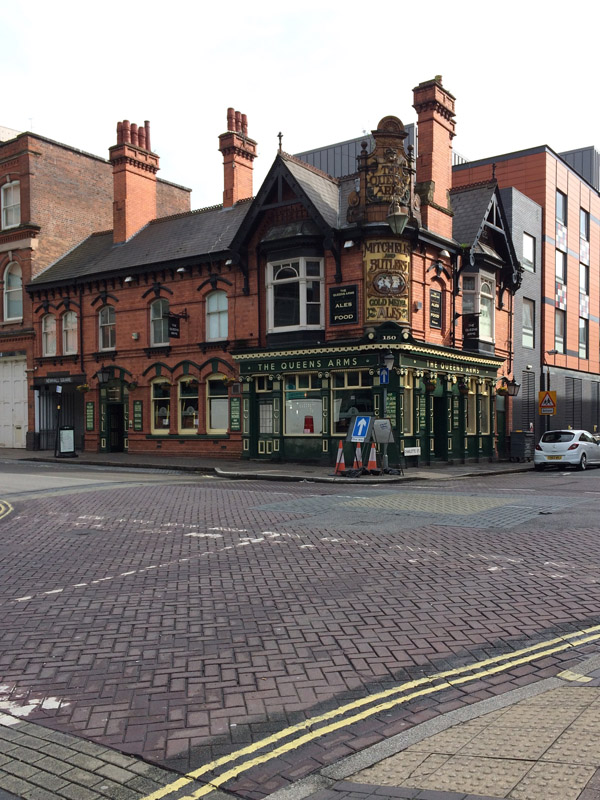 The canal system in Brum had been more recently revitalized to incorporate beautiful walking paths for the city as well as a fun way to tour around. 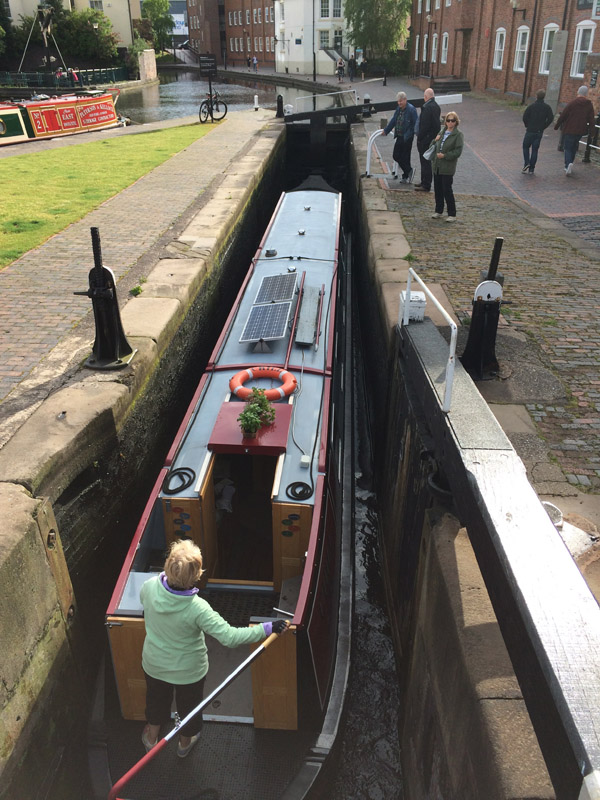 We got to see someone using the locks! Very cool system. 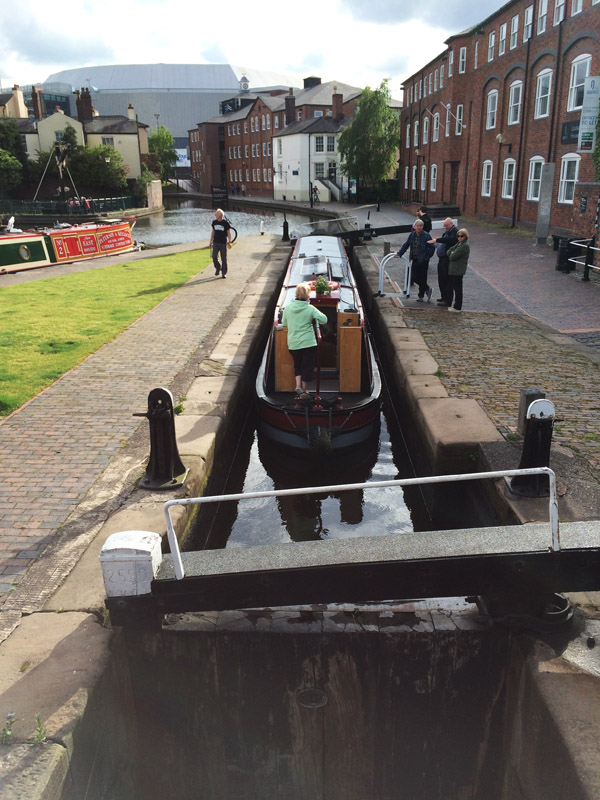 For a weekend adventure we decided to head to Warwick Castle. It was a pretty epic medieval time that I would recommend for anyone. 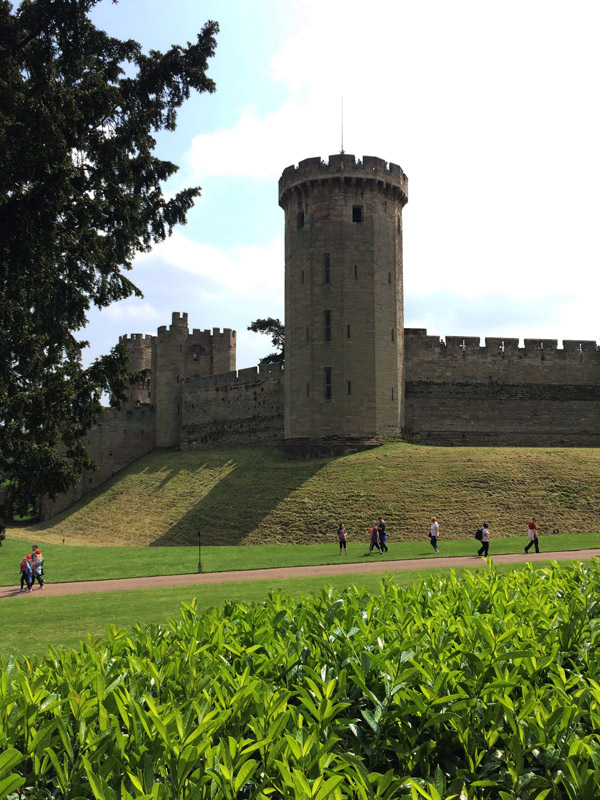 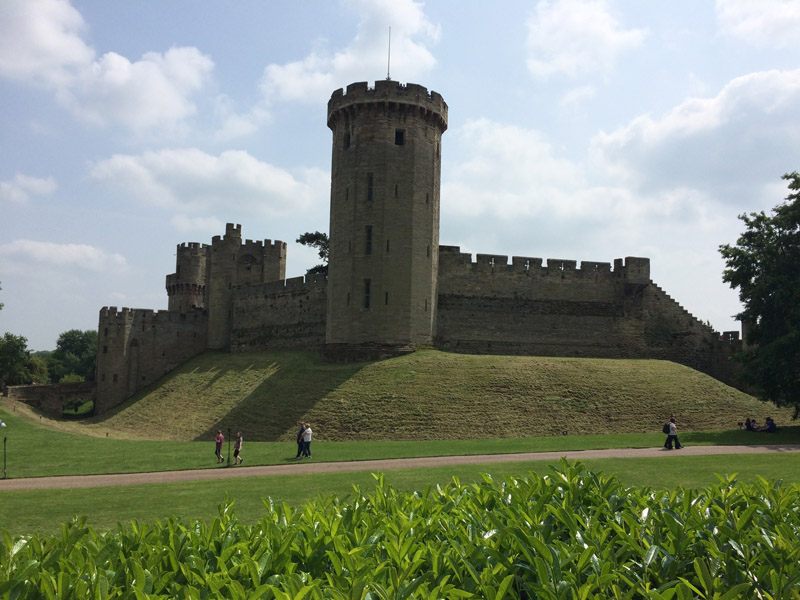 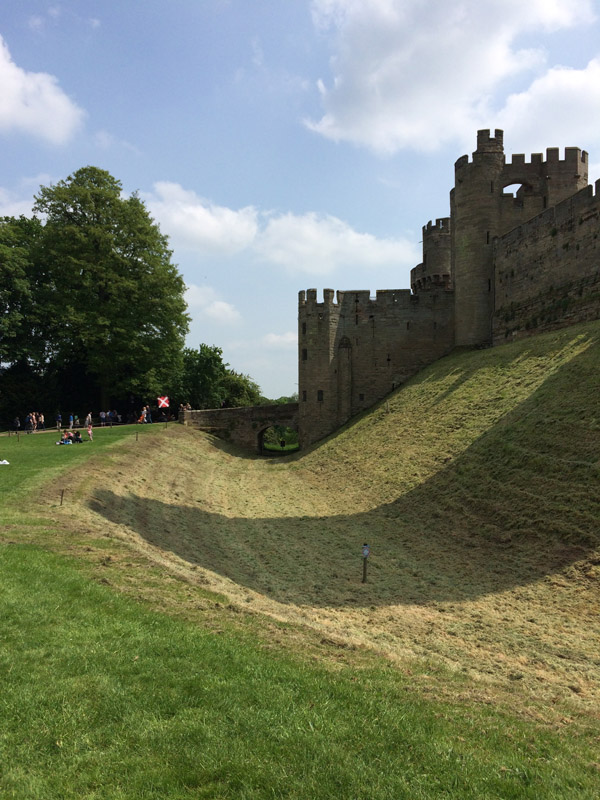 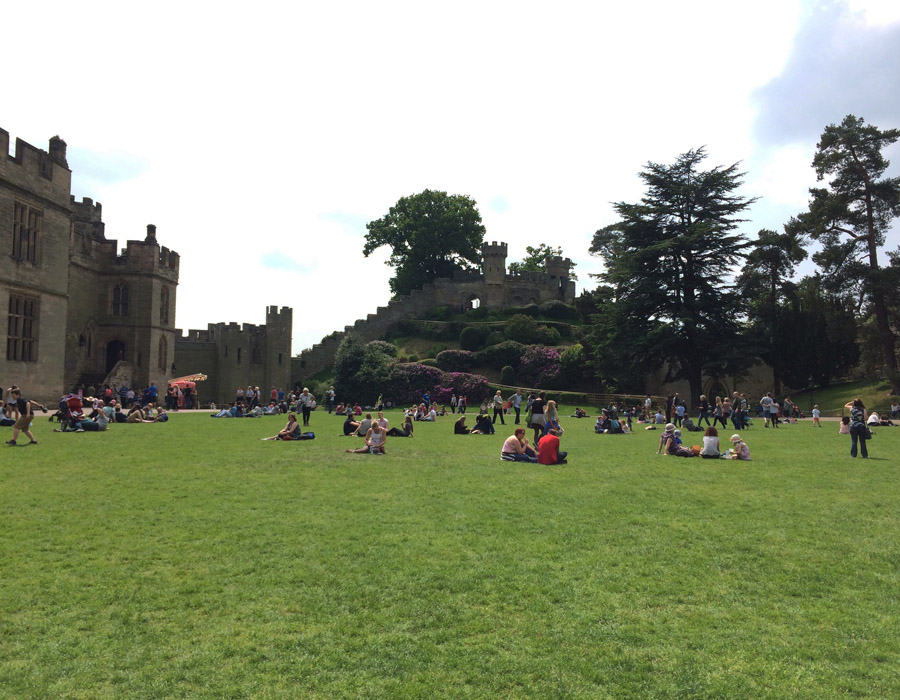 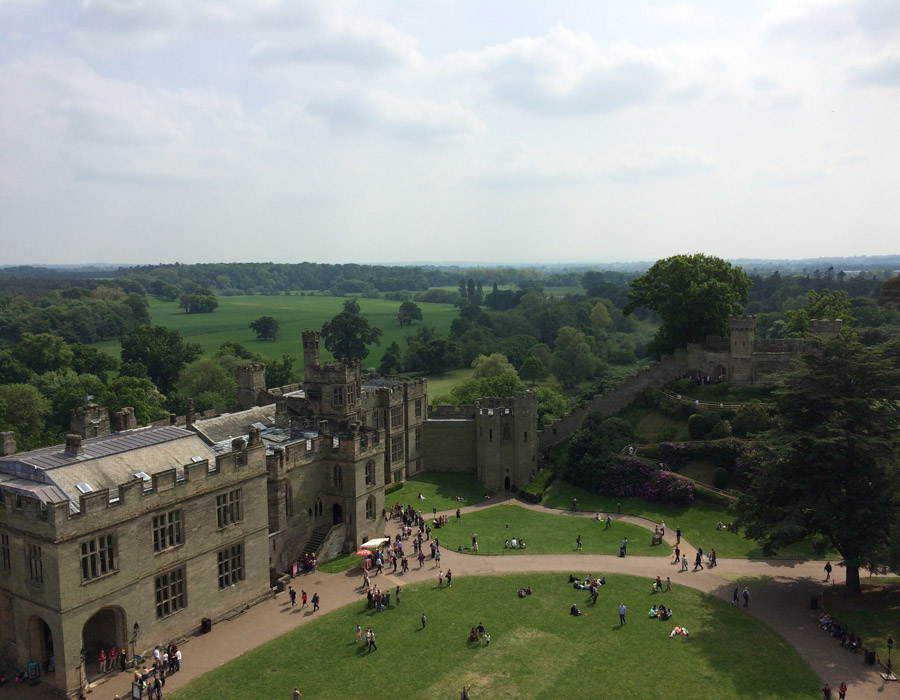 The castle is amazingly scenic and you can climb around the walls for epic views of the countryside. They also have various shows for guests including birds! and a trebuchet demonstration! We also caught some children learning sword fighting. So cute. 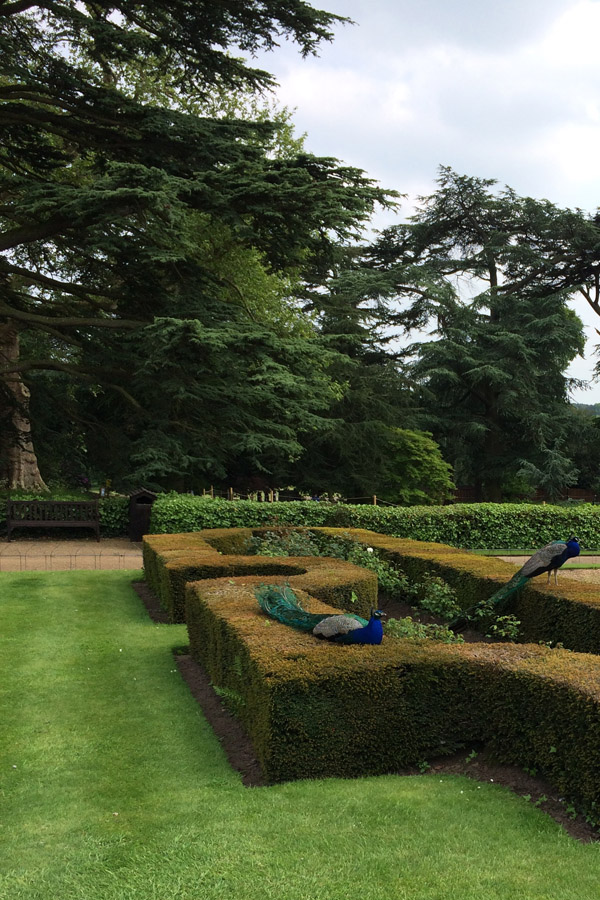 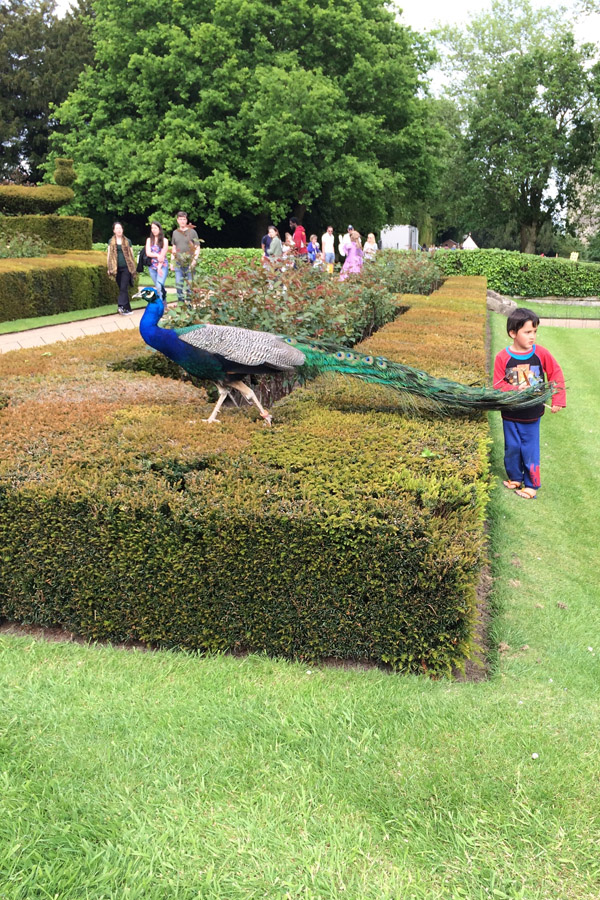 This kid was pestering the poor peacock, chasing it with his stick, and yelling at it. I’ve never wanted to see a bird attack a human more than I did that day. To my disappointment the peacock played it totally cool though. 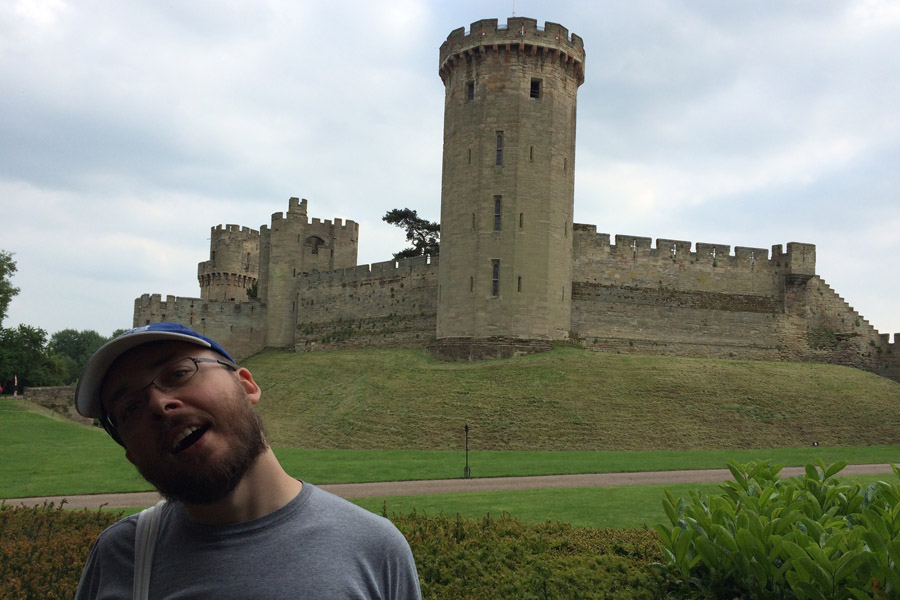 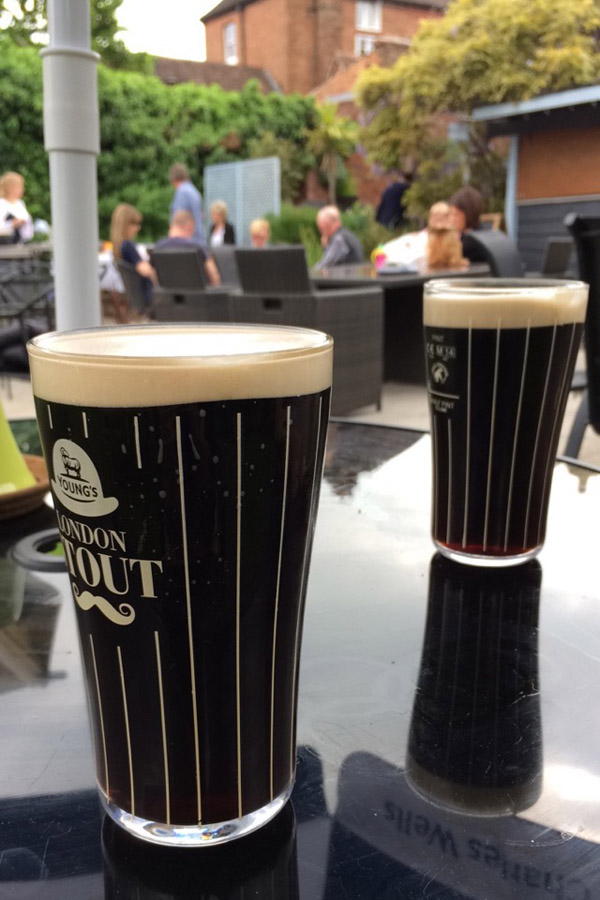 Extra bonus, we found this sweet pub near the castle in the town of Warwick. We had a few pints while waiting for their kitchen to open and then we had amazing fish and chips to help soak up the boozen. The best part about the pub is their amazing patio/garden; it really felt like I was at a friends house hanging out in the back yard…. a back yard full of strangers.

After our day trip to Warwick we absorbed our dear friend Abbey into our adventures. So, you can look forward to me sharing more thoughts on my love for Brum as I discover more of it with the “Abster” (nobody calls her that).

Bonus! Here’s my map of Brummie places to go to.

About 6 hours ago · reply · retweet · favorite

He has my vote. @43_Kadri has my vote 10 times. Also @91Tavares and some other guys. #LeafsForever twitter.com/avalanche/stat…

About 3 days ago · reply · retweet · favorite

The sticker isn’t as fancy this time but I’m boosted all the same. Efficient and friendly operation at the Halifax Forum! #yhz @ Halifax Forum Multipurpose instagram.com/migrantp/p/CYm…

About 6 days ago · reply · retweet · favorite

Sorry @XaiaX I found the real CEO of Antifa. What a legend. cbc.ca/news/world/neo…