Eating My Way Through Cyprus 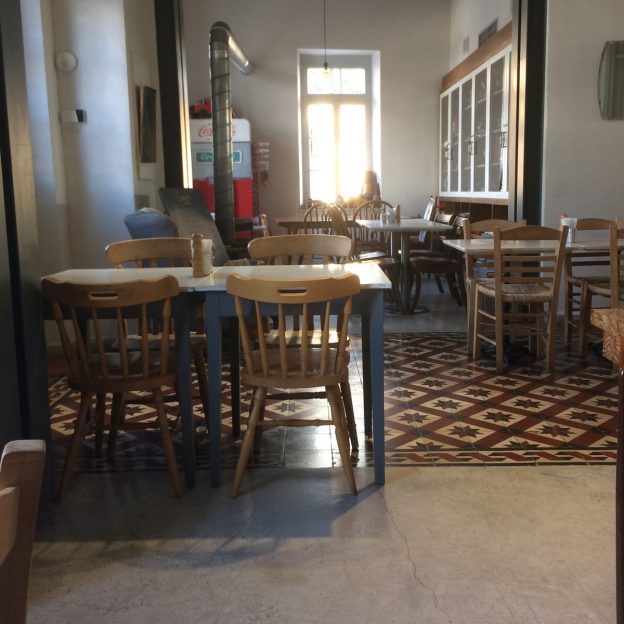 ah yaaa food. Cyprus has some pretty damn fine eats. It’s mostly a mix of Greek and/or Turkish dishes, but they have a few unique creations of their own. Like halloumi cheese! The meatiest of the cheeses originates in Cyprus!

On our first day in Paphos we found this Greek restaurant with a view and ordered all the tasty Cypriot treats. We had halloumi, chicken souvlaki, village salad, pita bread, chips, tzatziki sauce, and dranks. It was a feast that we only ate half of so we brought the rest home. Fun Fact: Cyprus tzatziki has mint instead of dill and it’s delightful. 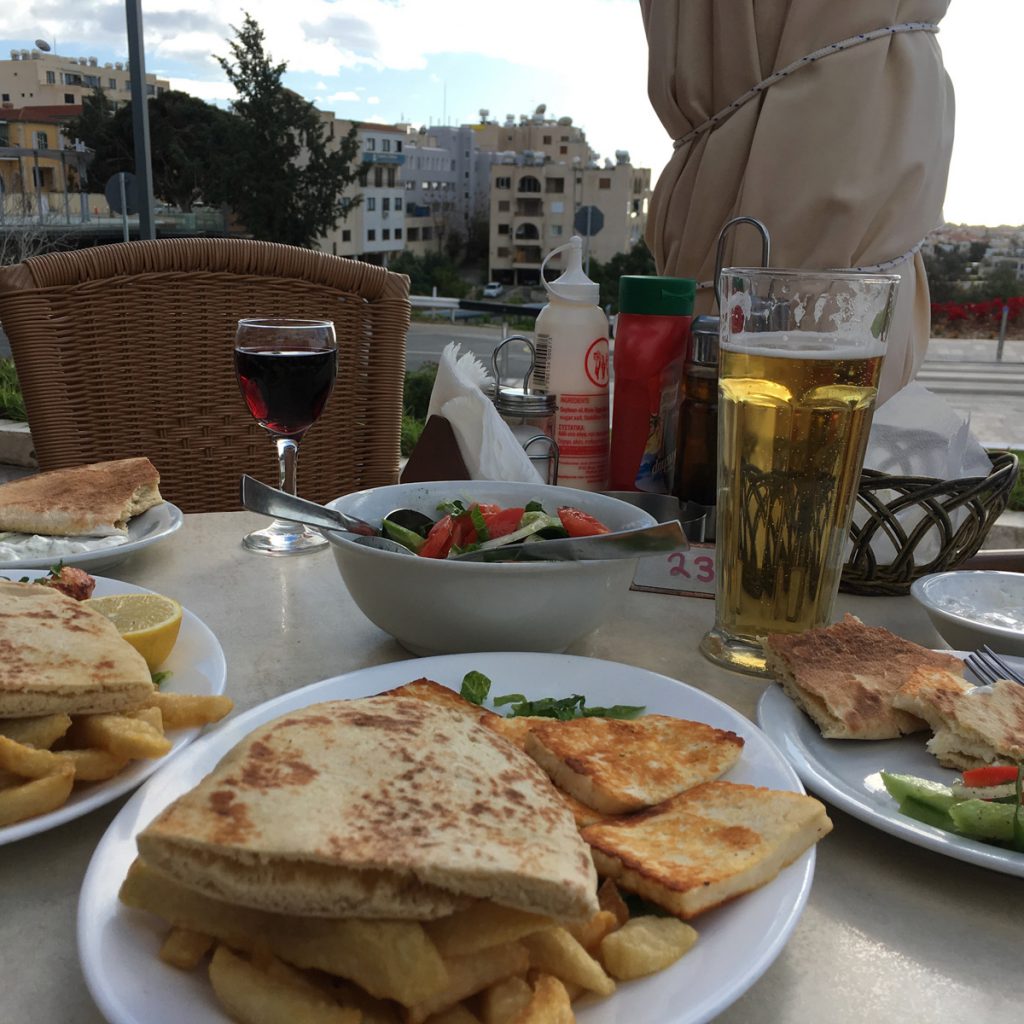 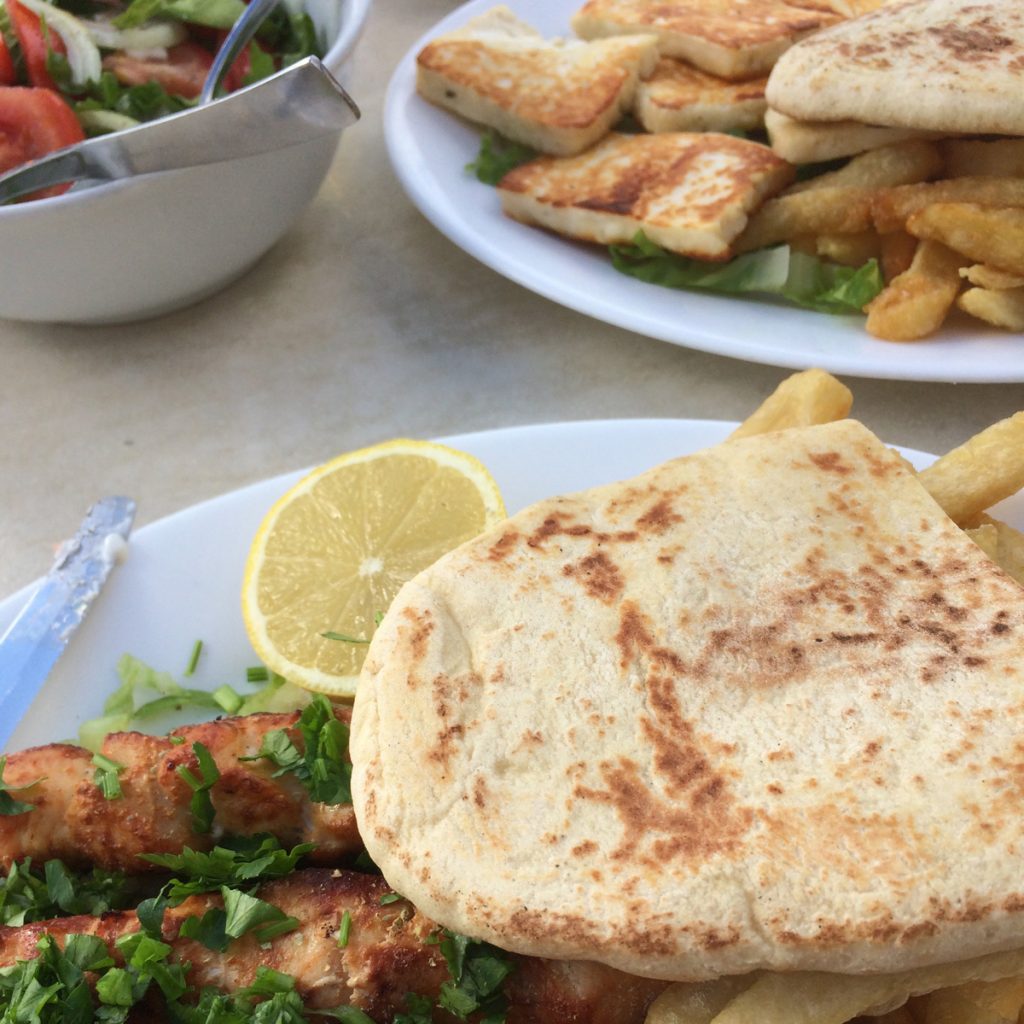 Another fav spot was also the closest restaurant, the Lighthouse beach restaurant only 2 mins walk from our house. We went there a bunch for drinks and for lunch a couple times. They make a mean and greasy cheese “toasty” or grilled cheese sammich (Canadian translation). 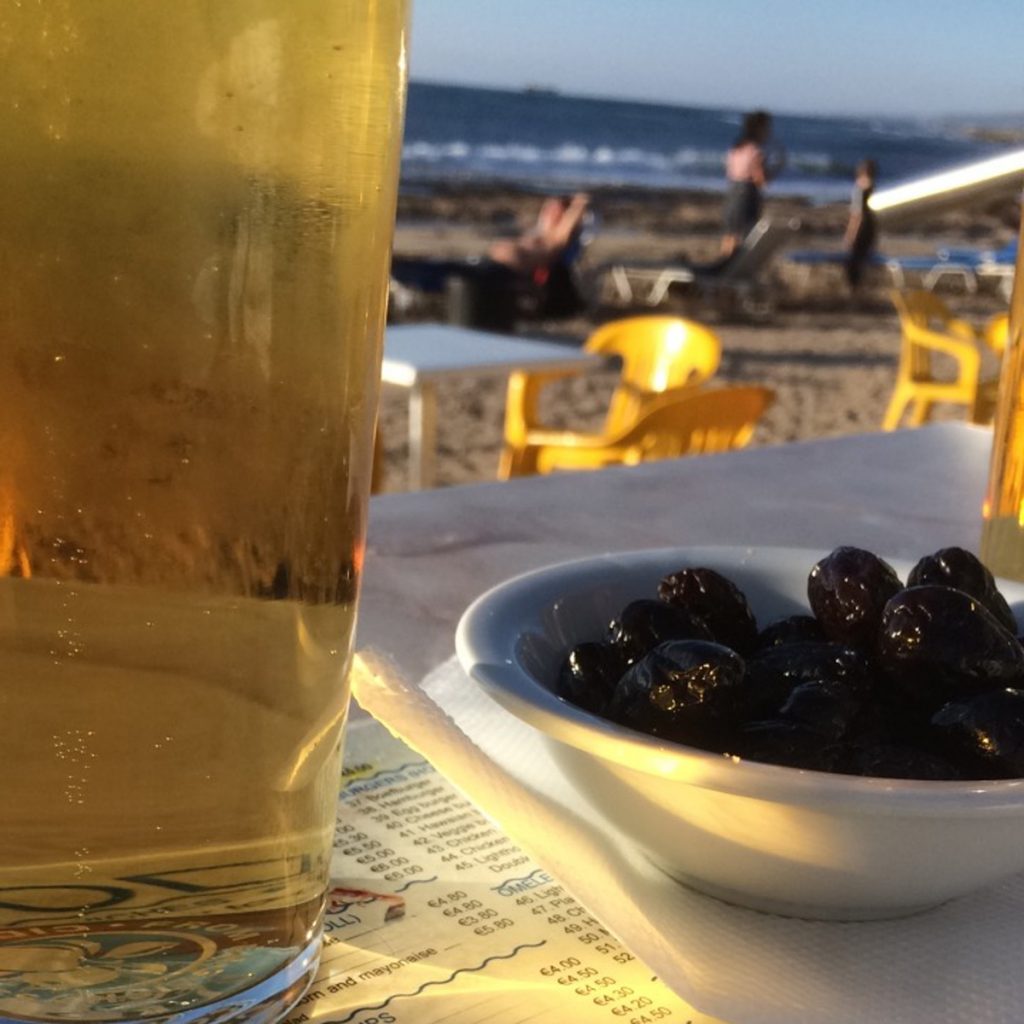 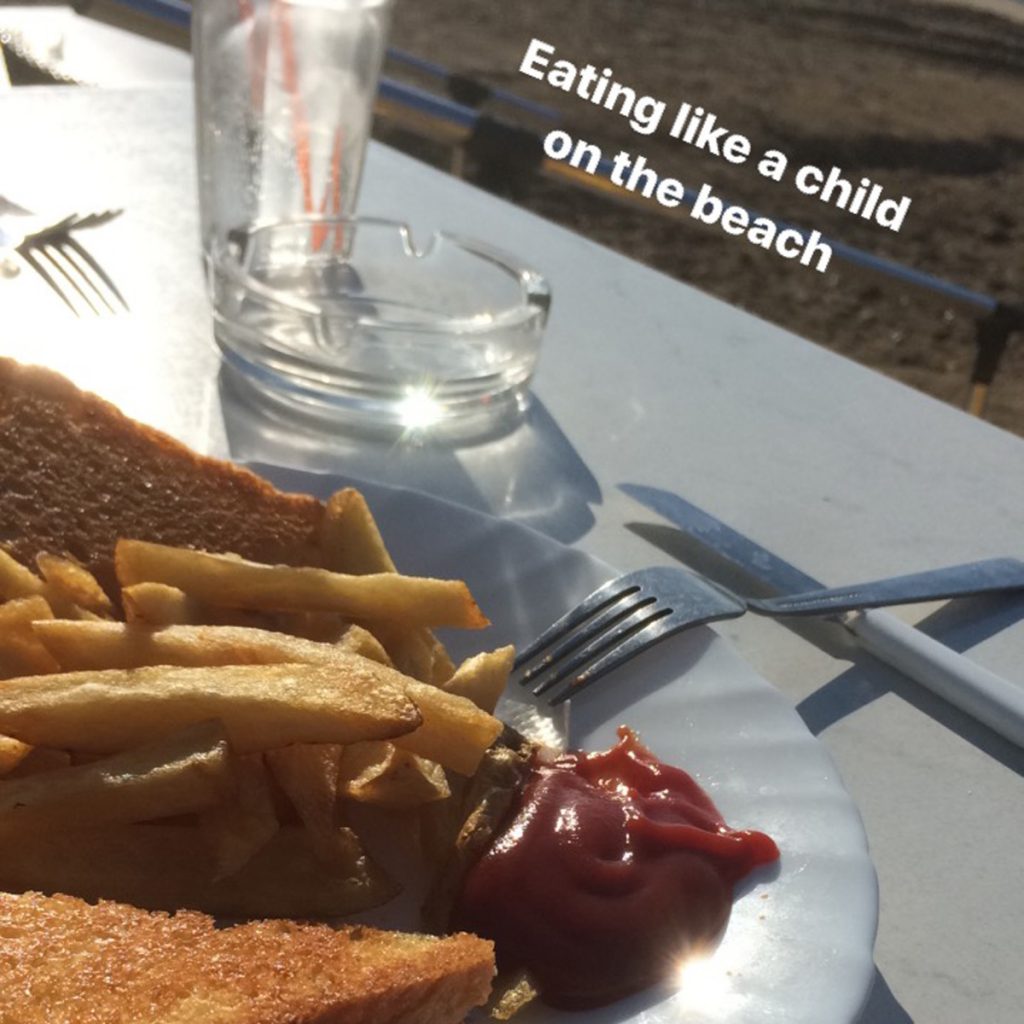 One of my fav things while travelling is exploring grocery stores and finding different markets. I particularly liked the cartoon cheesy crisps available in Cyprus. 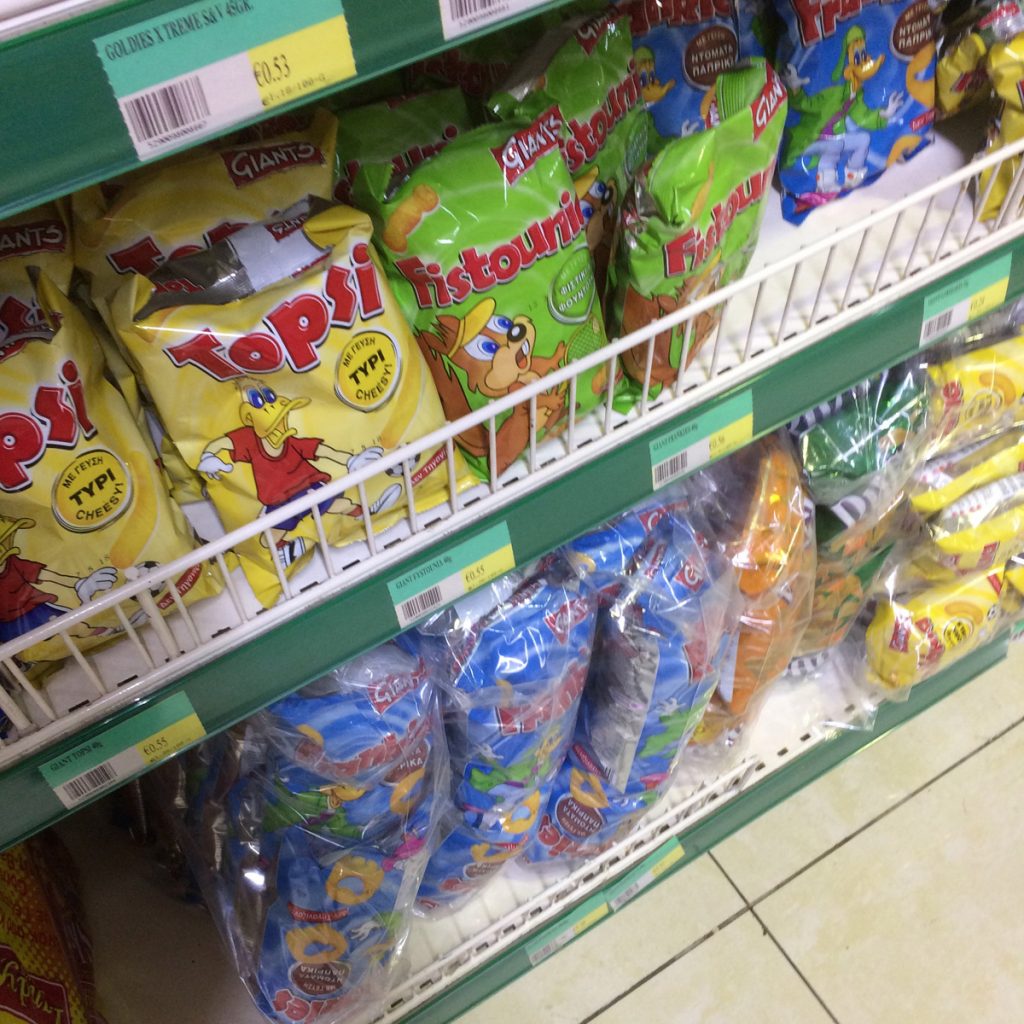 I also enjoyed the 1L and 2L bottles of beer available. 6 pack of beer means something a little different in Cyprus. 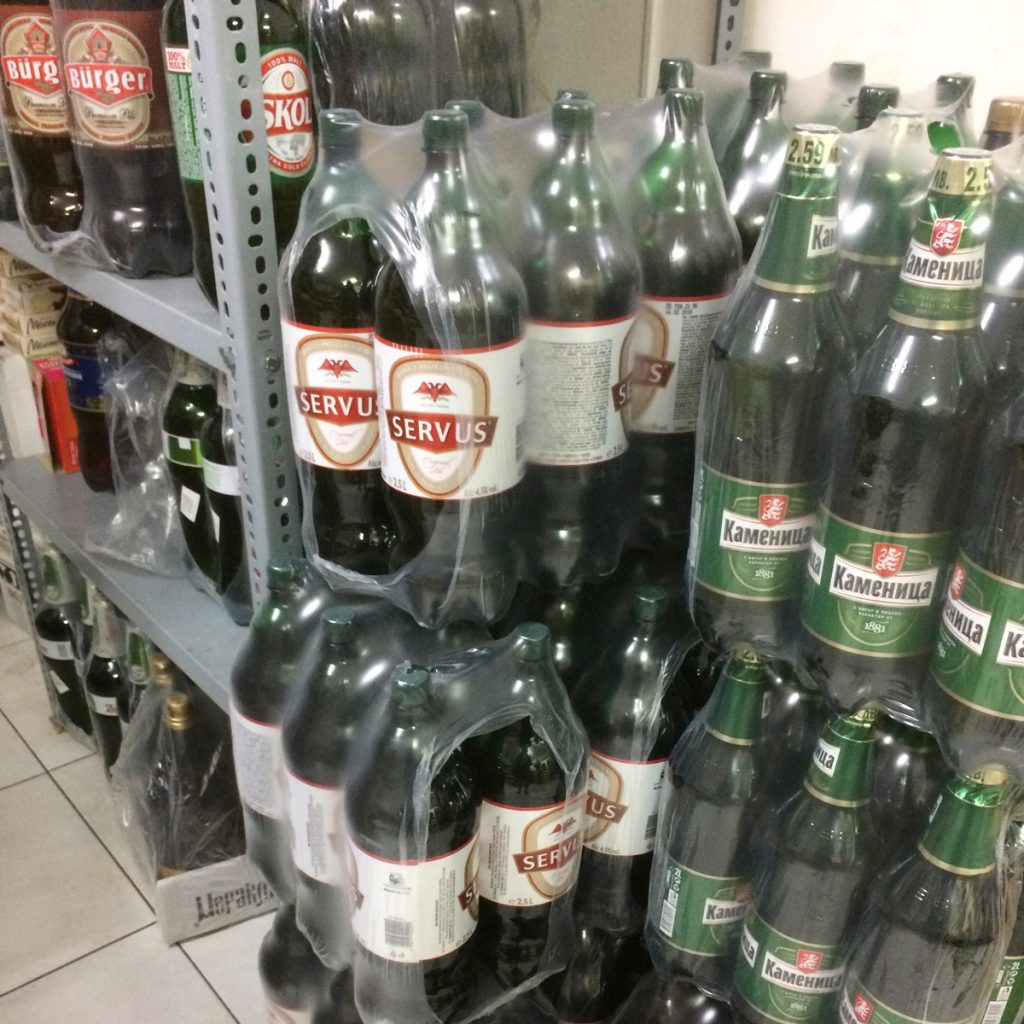 For John’s birthday we went on a day adventure which included the best meal of my life. We happened upon this adorable restaurant in downtown Paphos after trying to go to the museum that we found out was closed for construction. The restaurant had adorable antiques everywhere and a menu that changes daily. We chose a million things to eat and a jug of wine and left very happy.

We enjoyed halloumi boiled in honey, fresh sesame bread, bean salad, spicy cheese “salad”, and most interestingly we had boiled sting ray as the main dish. Honestly, I didn’t even know people ate stingray, but now that I have I can understand why. It’s super tender similar to really juicy chicken meat, like the fall off the bone dark meat of a chicken if you know what I’m saying. The flavour was more fishy like tuna and it was served on that pasta that’s like large rice (orzo) doused in olive oil and lemon. SO GOOD.

The halloumi in honey really surprised me. It has the right combo of sweet and salty. This ones also super easy to make at home, I just took a piece of halloumi, poured honey over that bad boy, and stuck him in the oven until the delicious smells happened. The internet probably has a proper recipe, something more specific but I cook by feel. 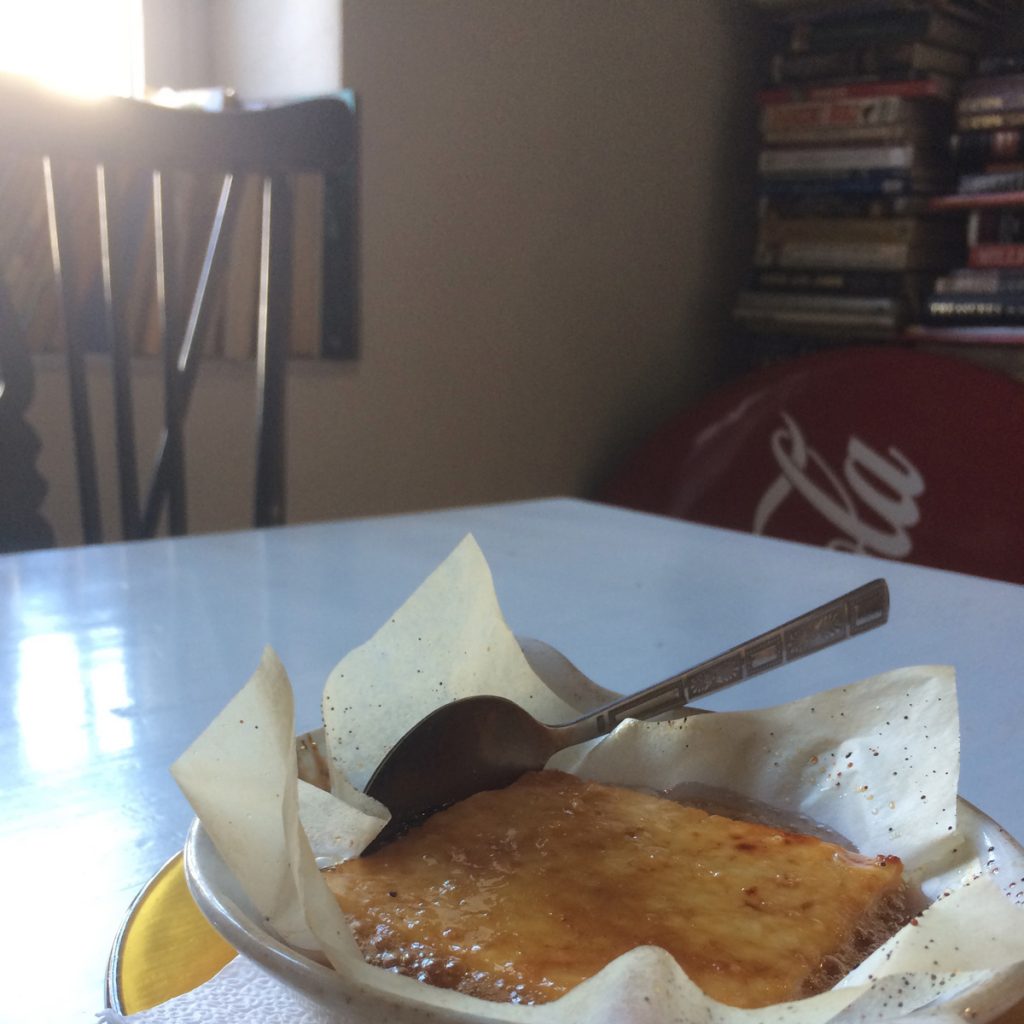 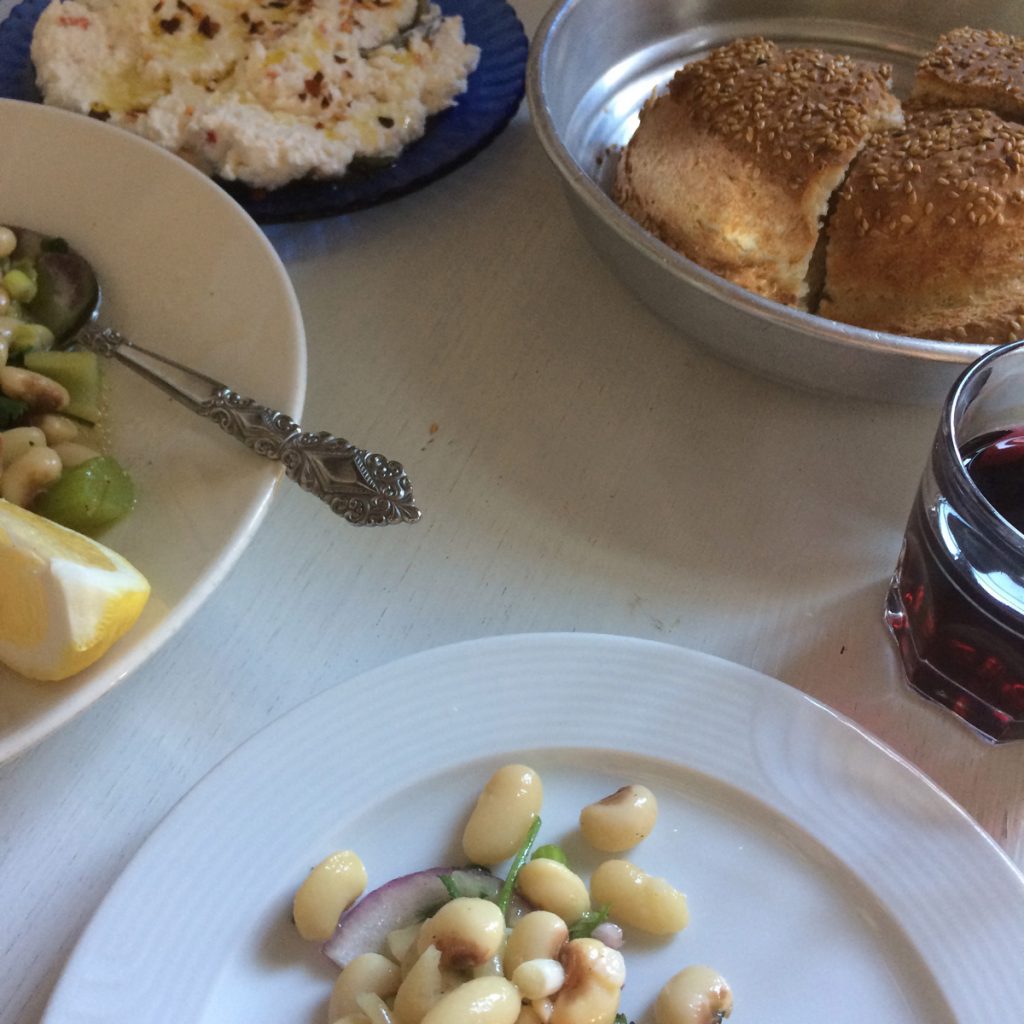 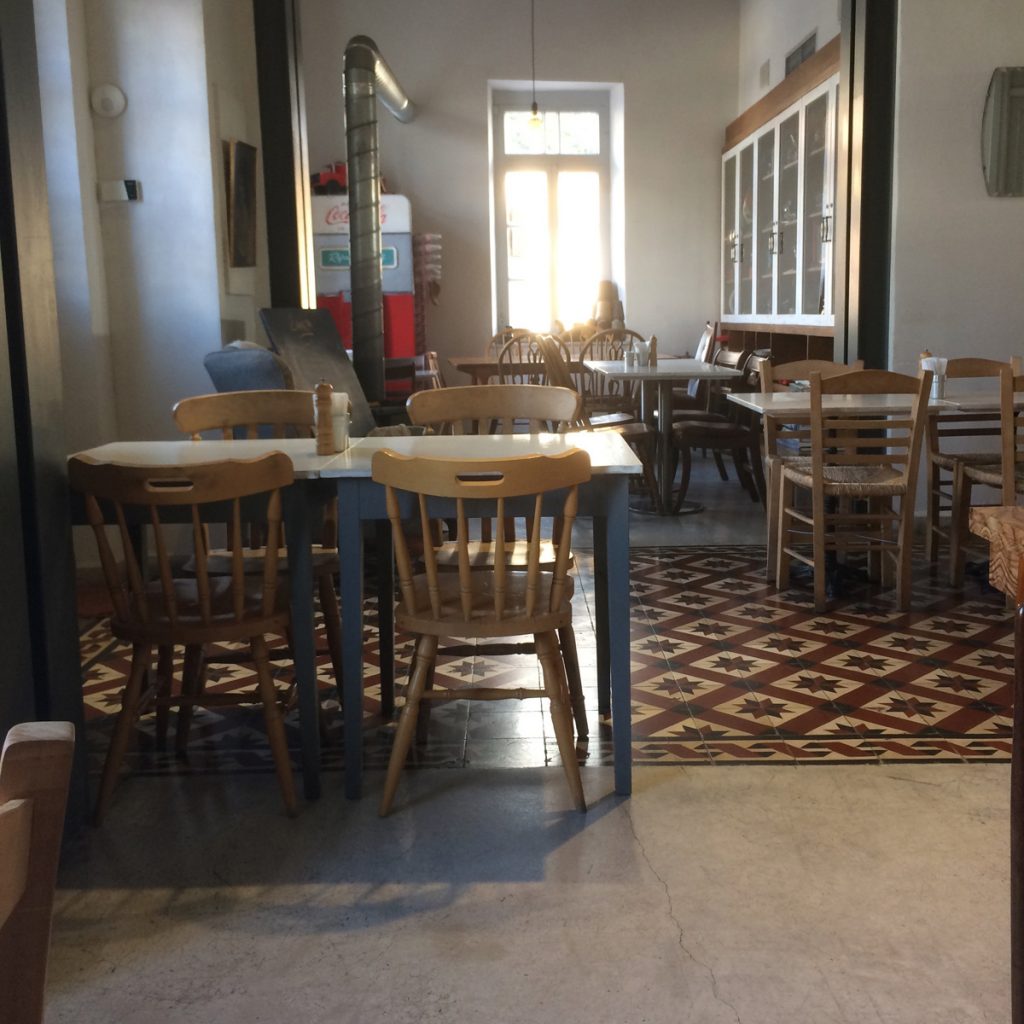 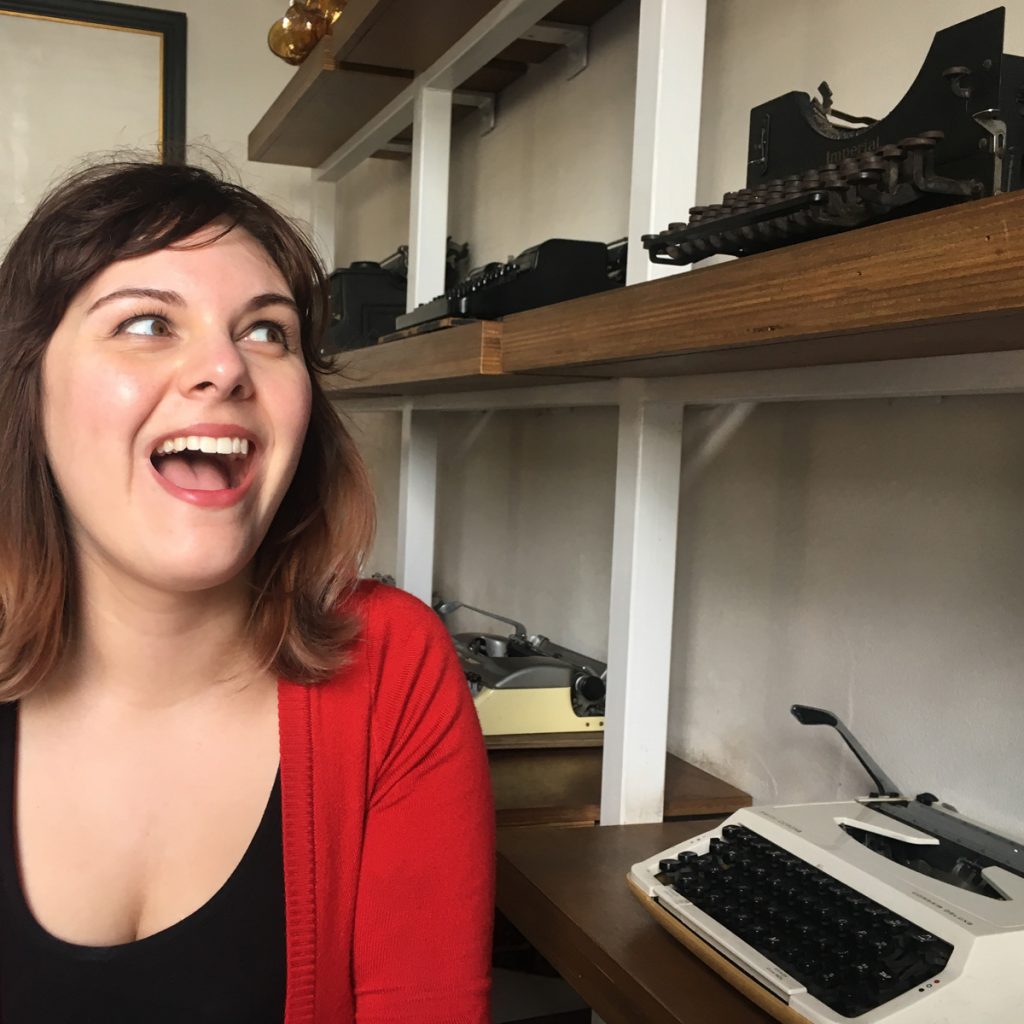 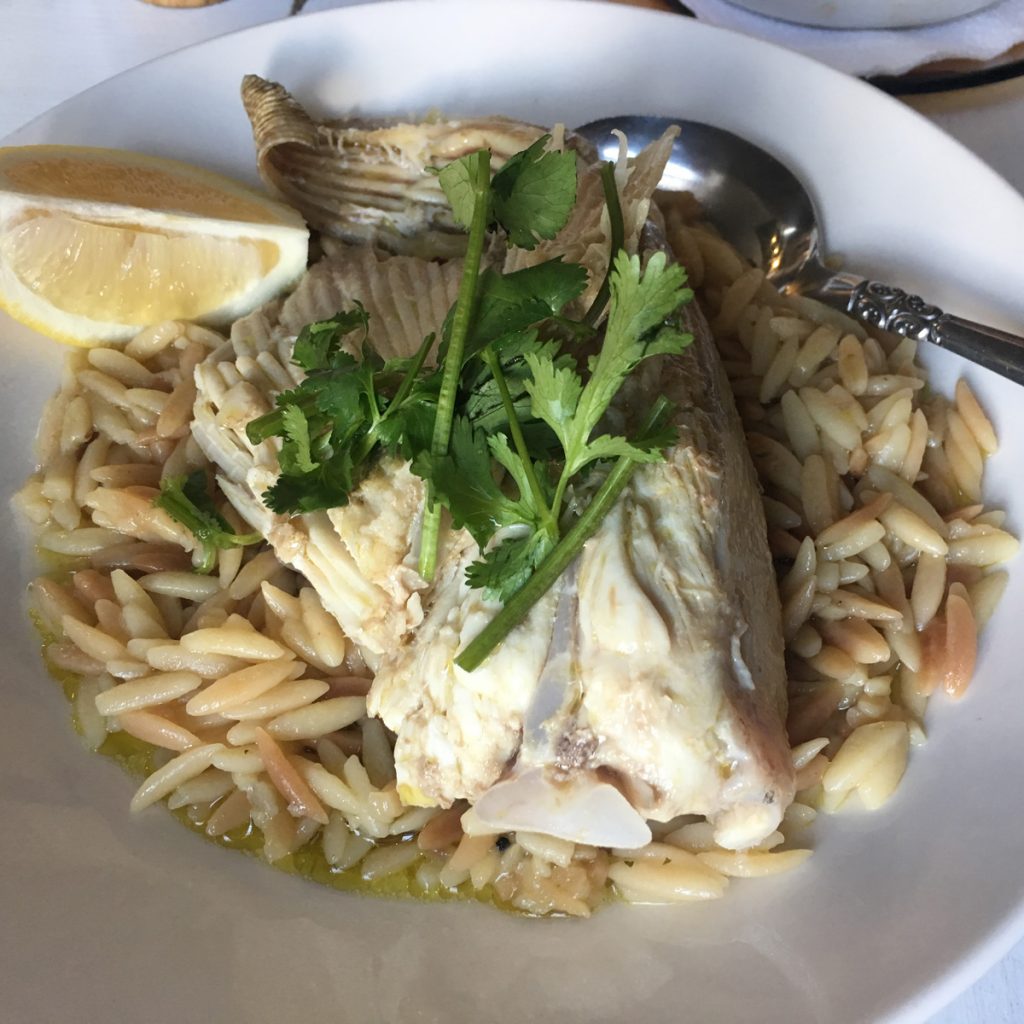 After that amazing meal John and I stopped for coffee at our favourite cafe in Paphos, Beanhaus. I know I did a whole post about coffee, but this coffee is so good it deserves a mention here too. 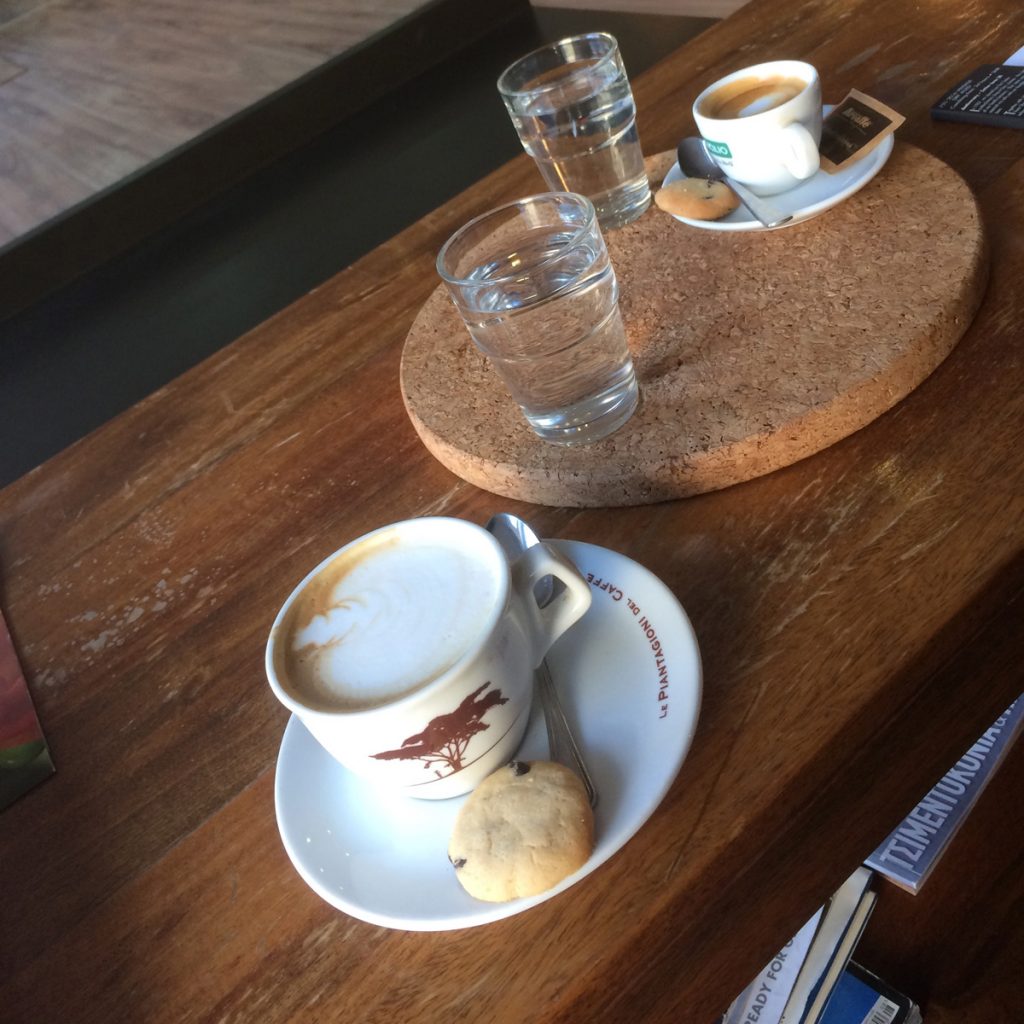 At home we would try various recipes and exciting things with local ingredients. A fun thing about our Paphos apartment is that we had an electric juicer! So, we had fresh made orange juice basically everyday. 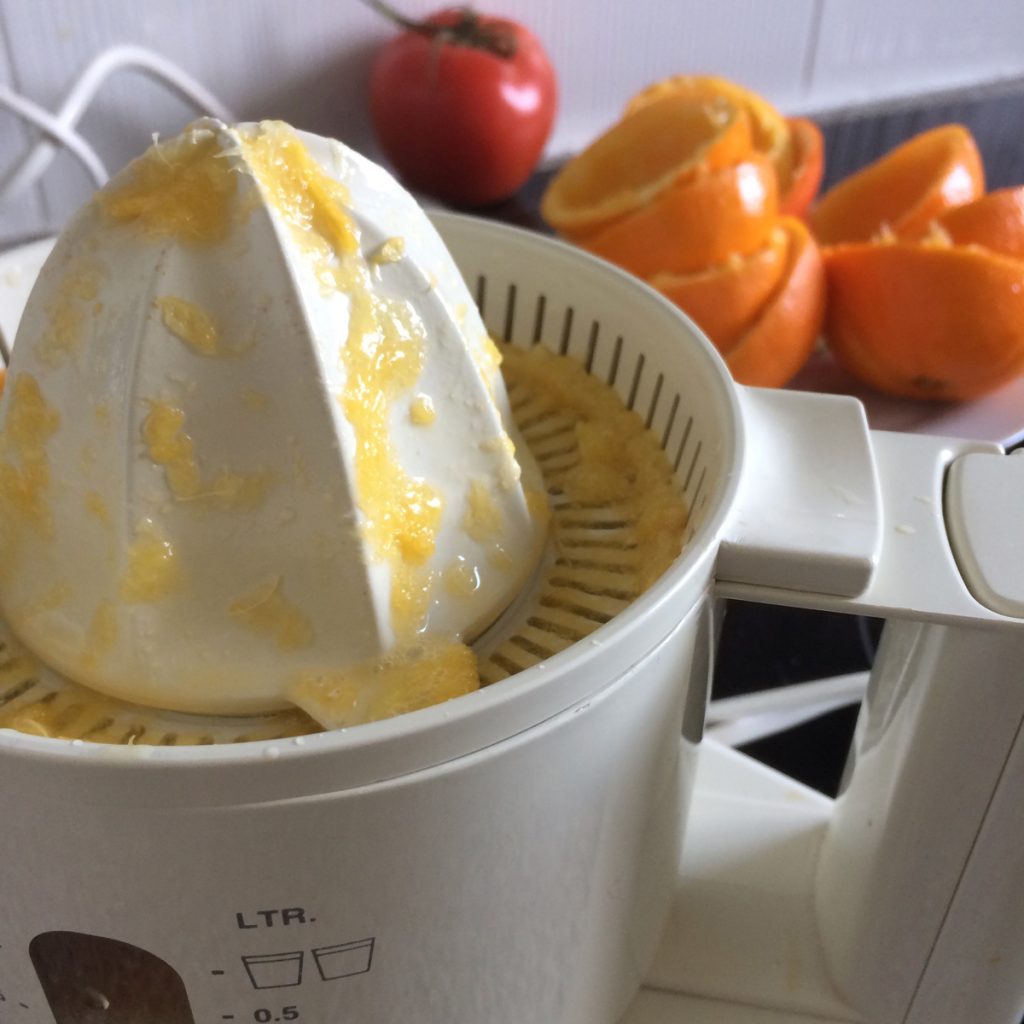 While in Paphos I got a little obsessed with this cereal, Honey Balls. I thought they were going to be like Corn Pops, but they were so much better. Like still super sweet but the flavour was all honey. Delicious honey. We came up with a great jingle: “Gotta get me some of them Honey Balls!” Maybe they’ll buy it from us… the price is unlimited honey balls.

I found a lot of good recipes from Afrodites Kithen blog, It’s all about local Cypriot foods and has a really interesting post about the halloumi making process. 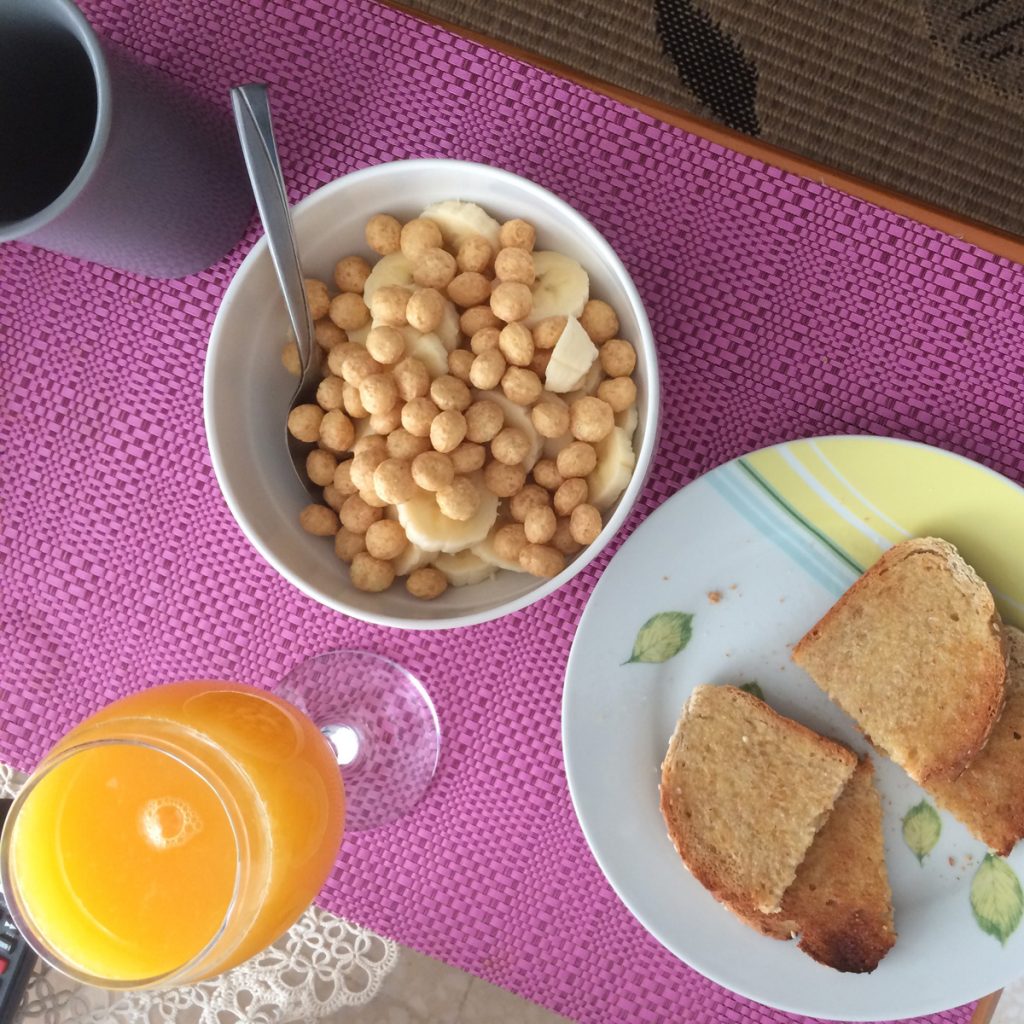 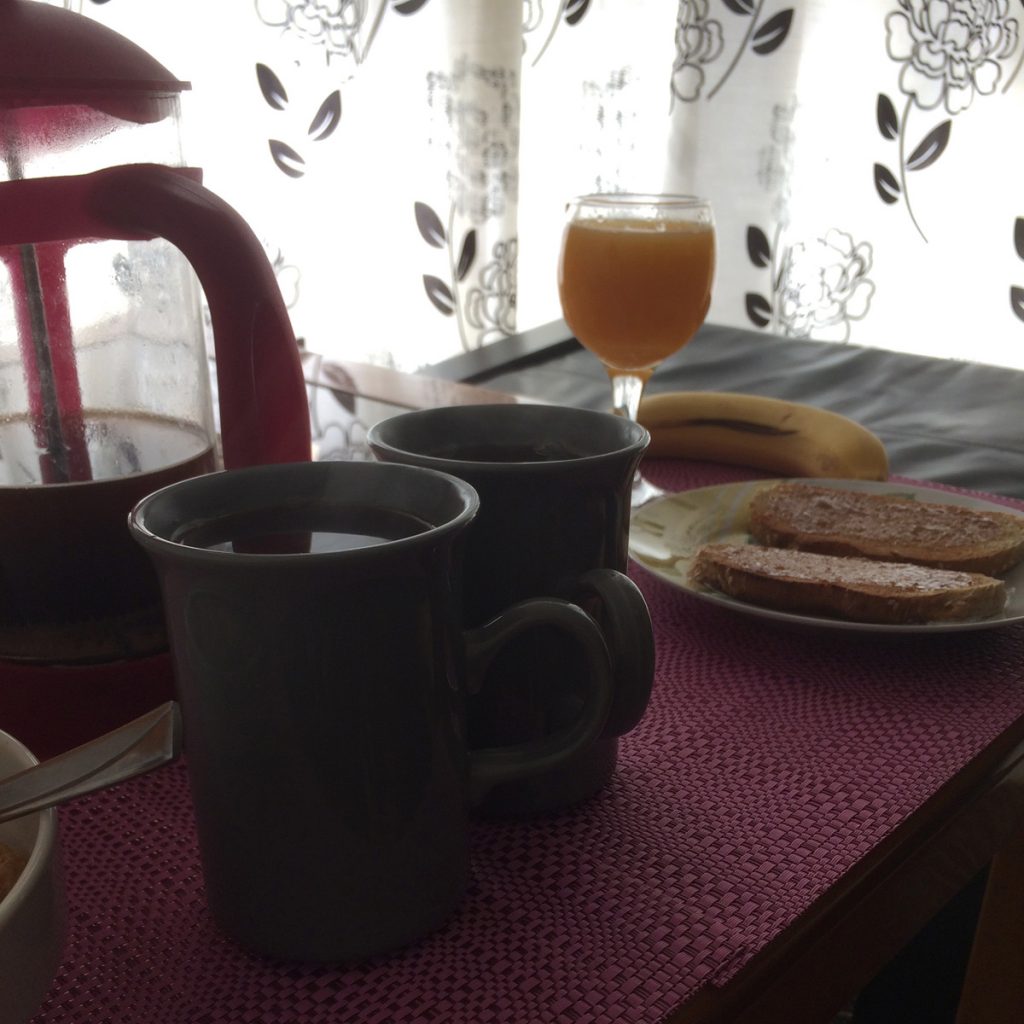 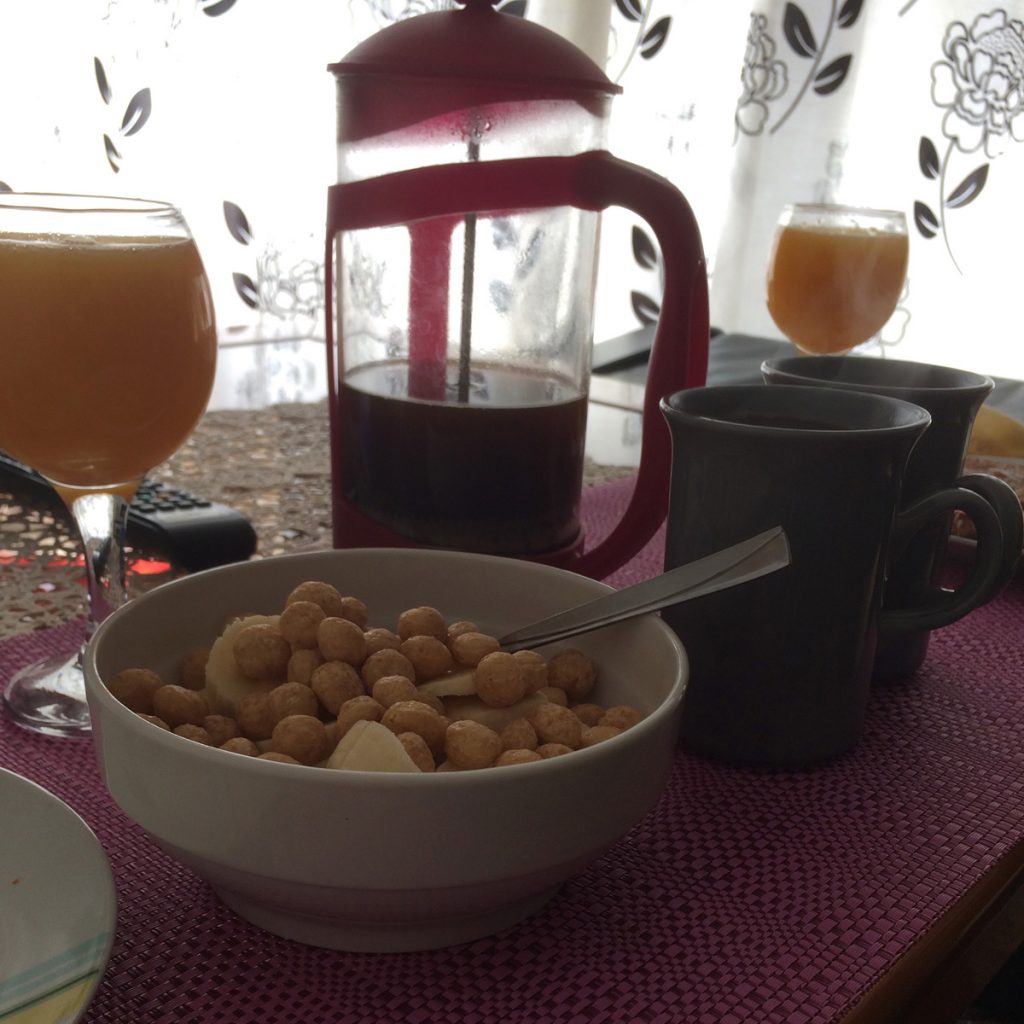 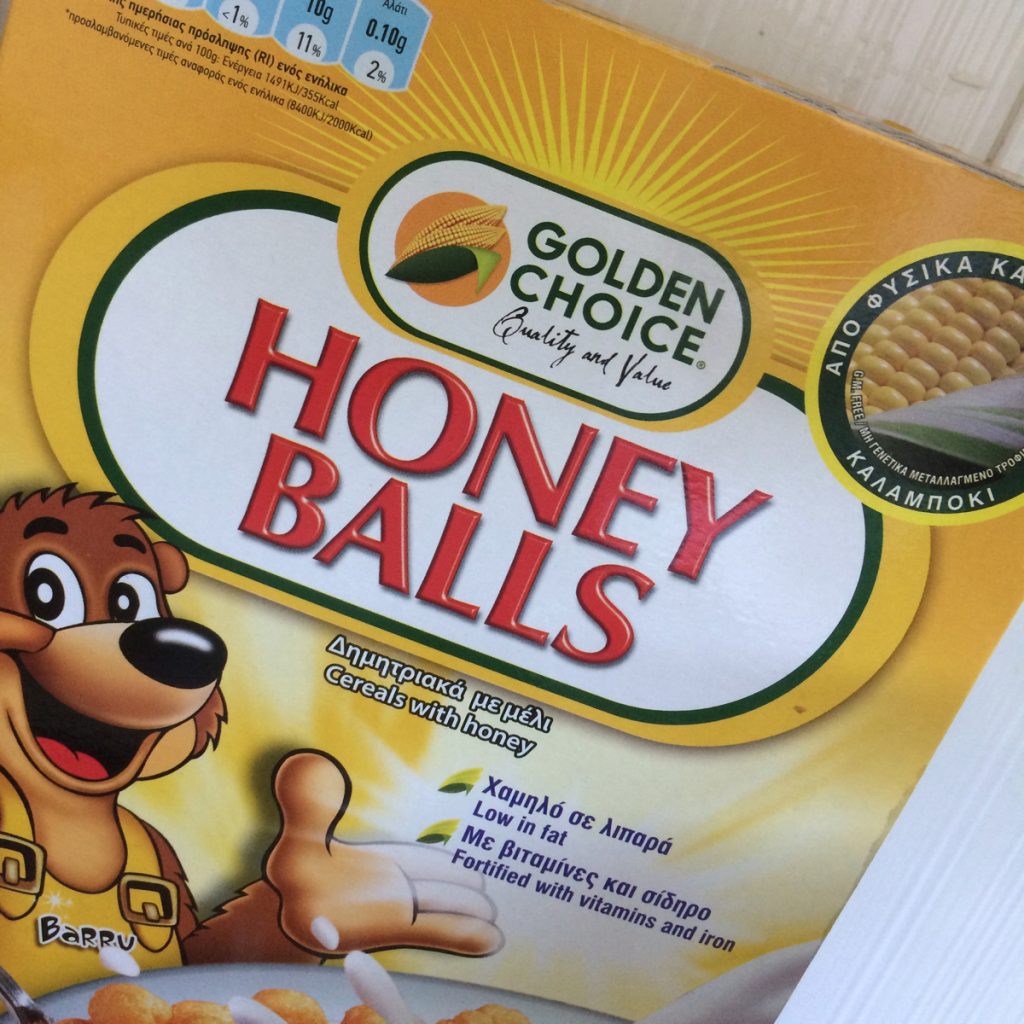 The local breakfast treat is these crepe like things. They usually come in a large plastic bag and you eat them with honey. They’re a little oily, but breakfast food is often kinda bad for you. 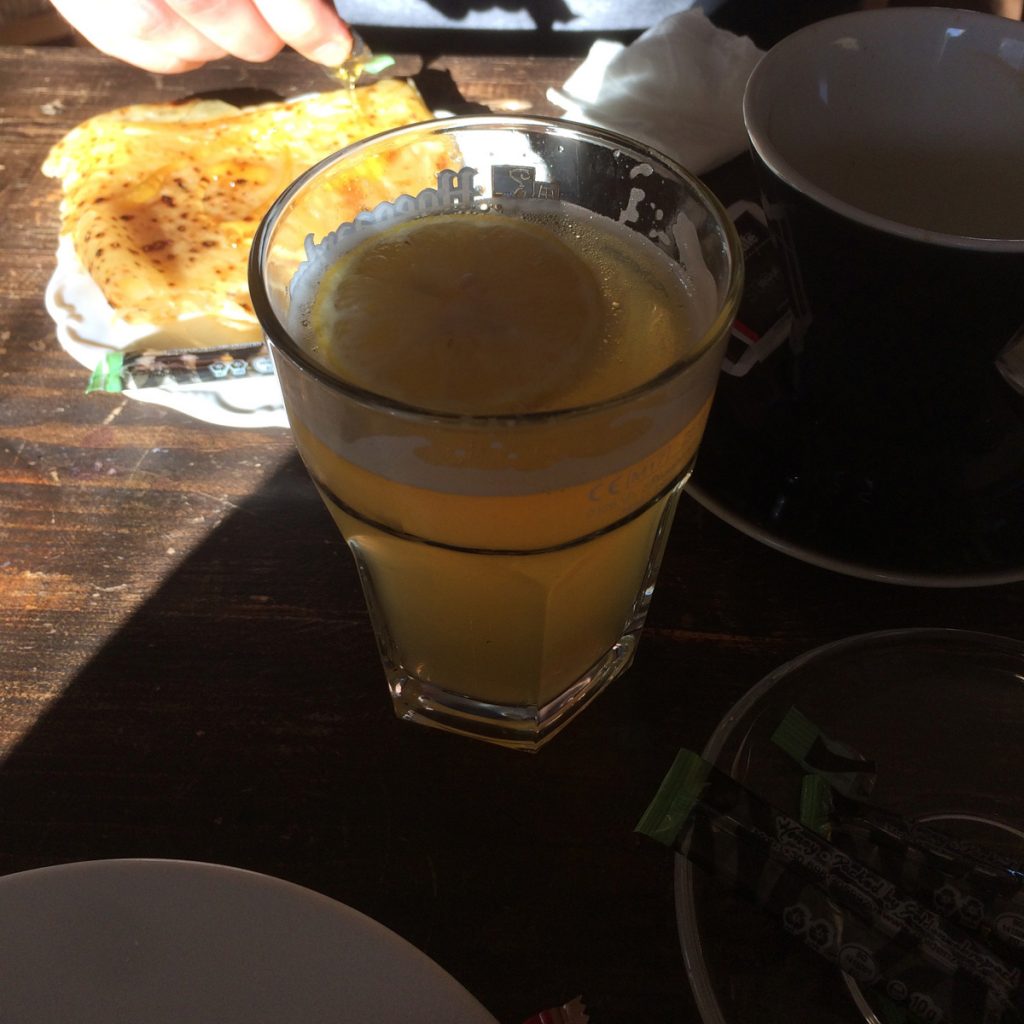 When we journeyed up to Nicosia we made a stop in the seaside town of Limassol and we had lunch there. I found this family-owned traditional Greek Cypriot style restaurant that was a bit off the tourist path and we were not disappointed.  Our lunch included baked spicy feta, pita bread, tzatziki, fried calamari, and a veggie moussaka. 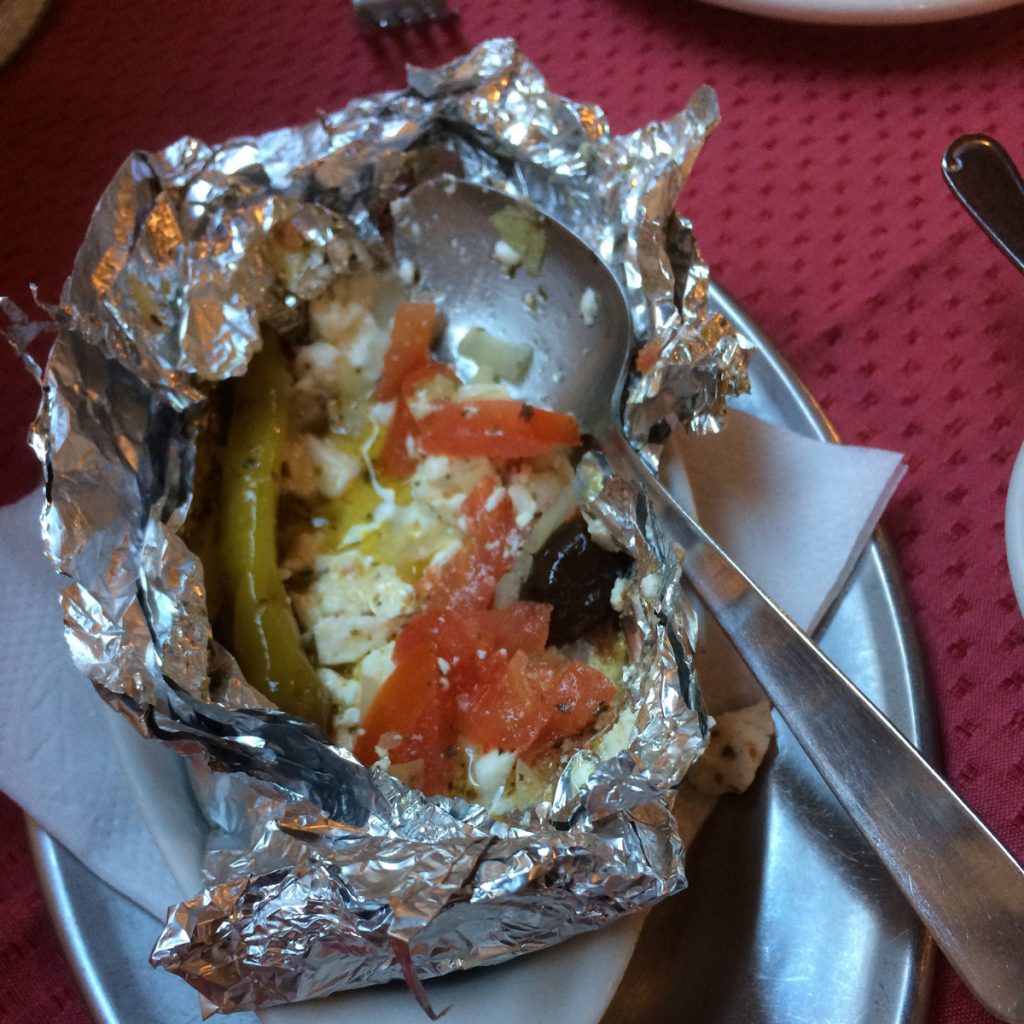 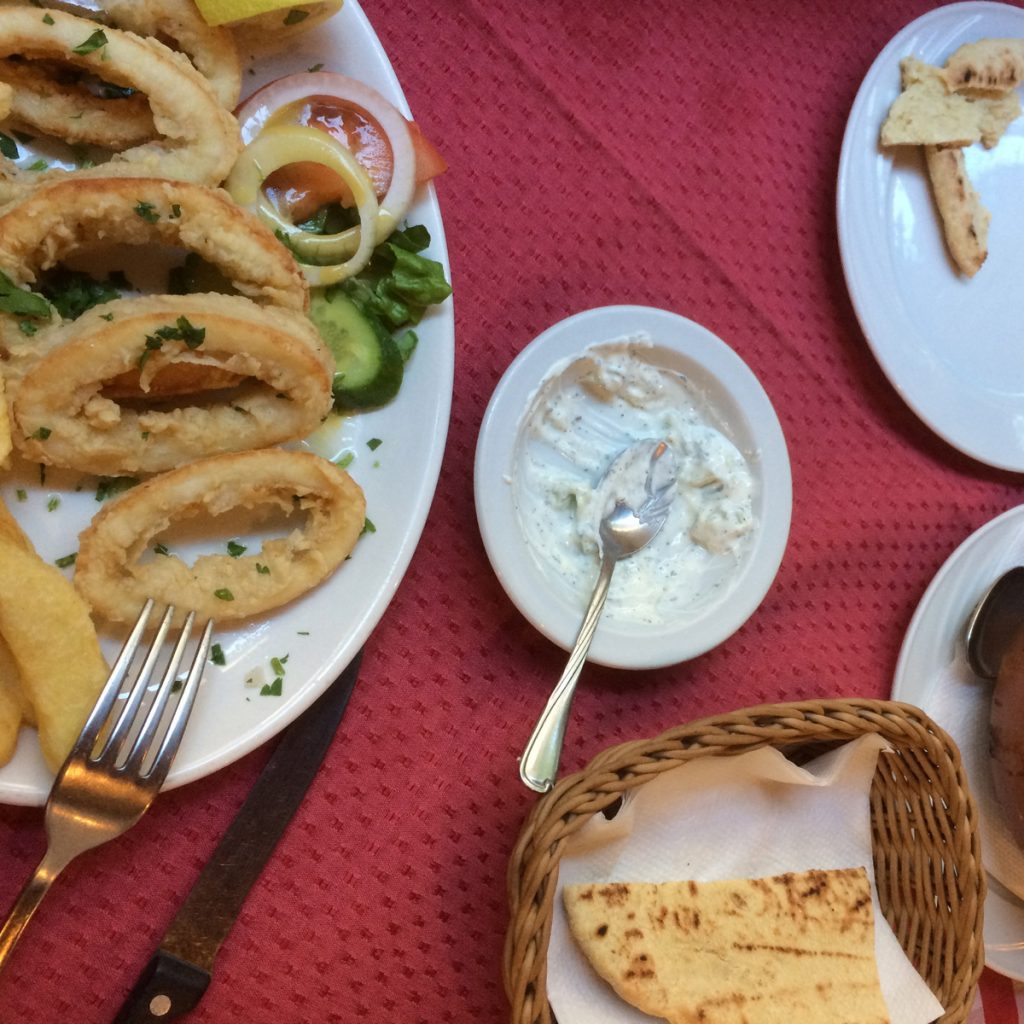 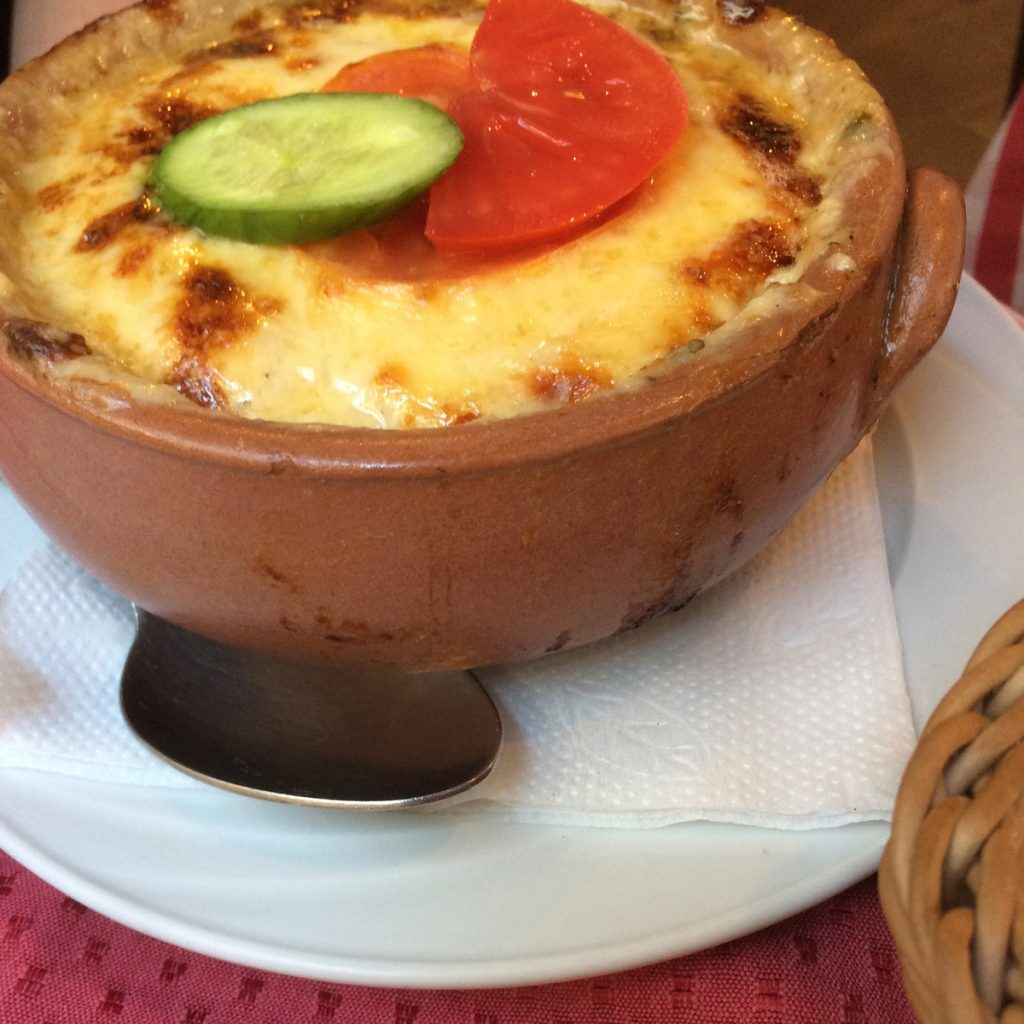 Beer! We visited a really lovely brewery that’s just outside Paphos. They make some mean pizza in their wood fire oven and delicious beer and cider. 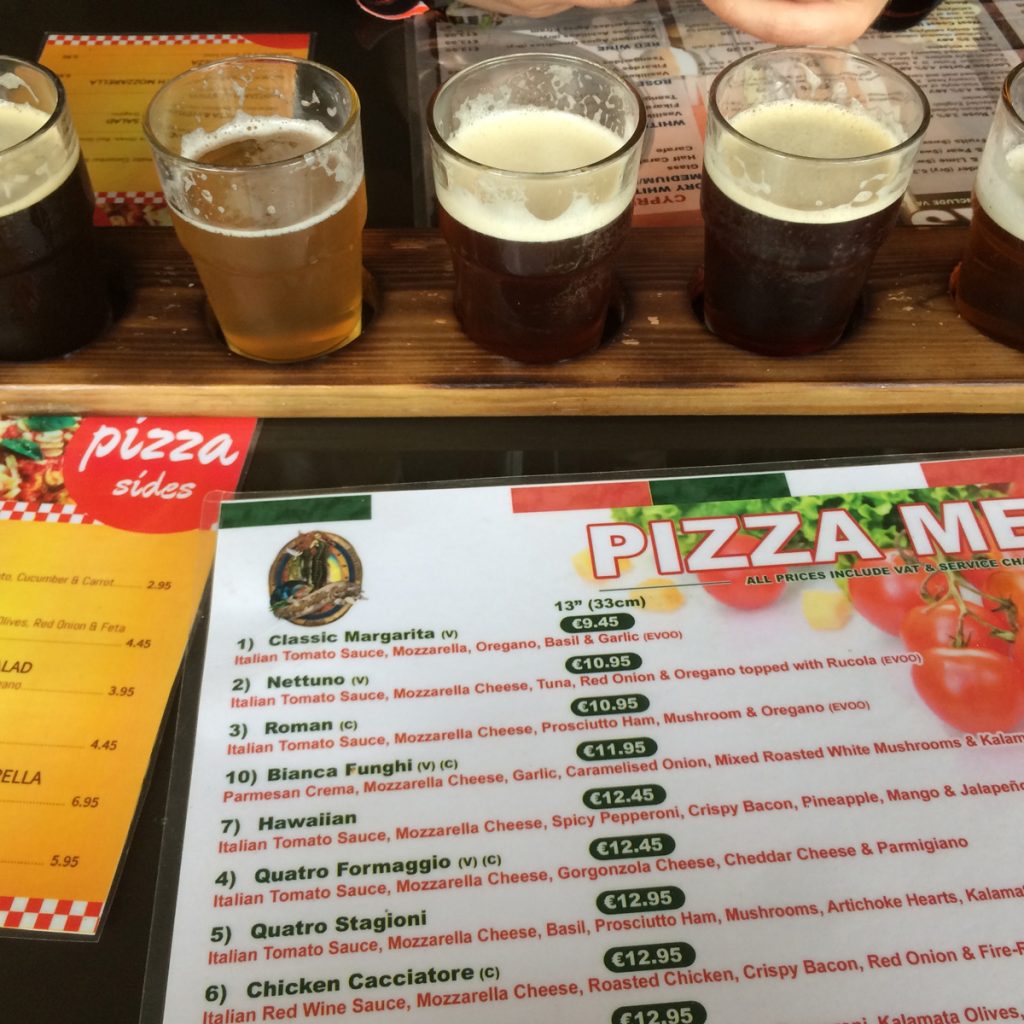 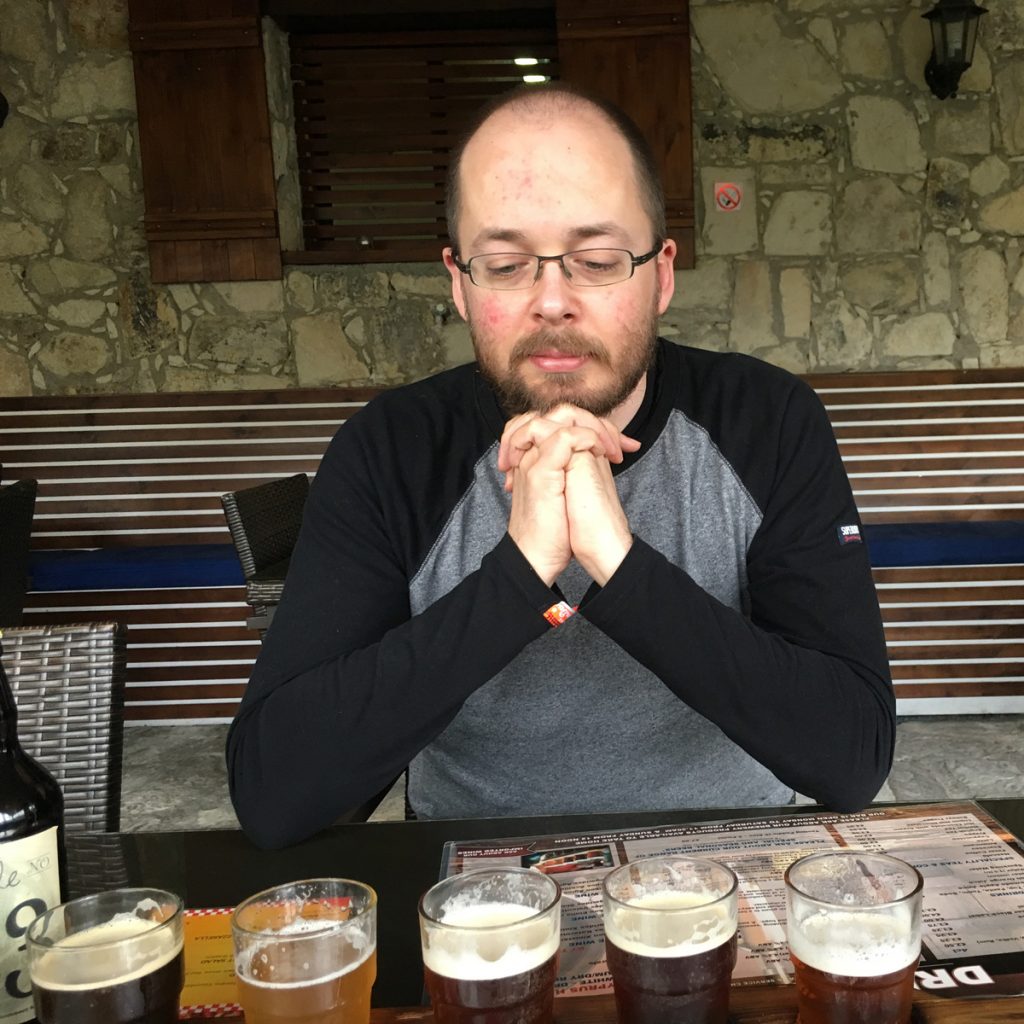 We also really loved grabbing a pint at this little bar on the waterfront in Paphos. They have a decent selection of local and imported beers as well as fun little games on every table. There’s even a cat that frequents this bar. 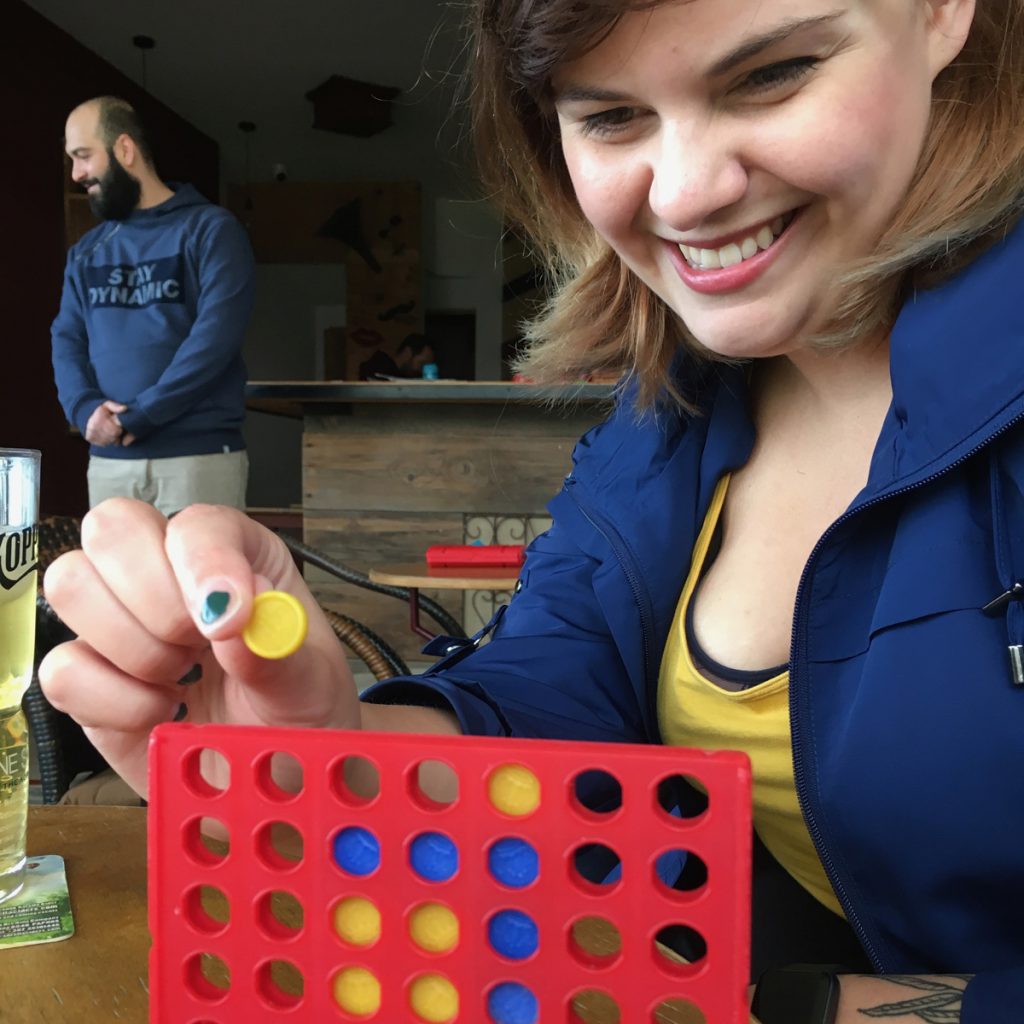 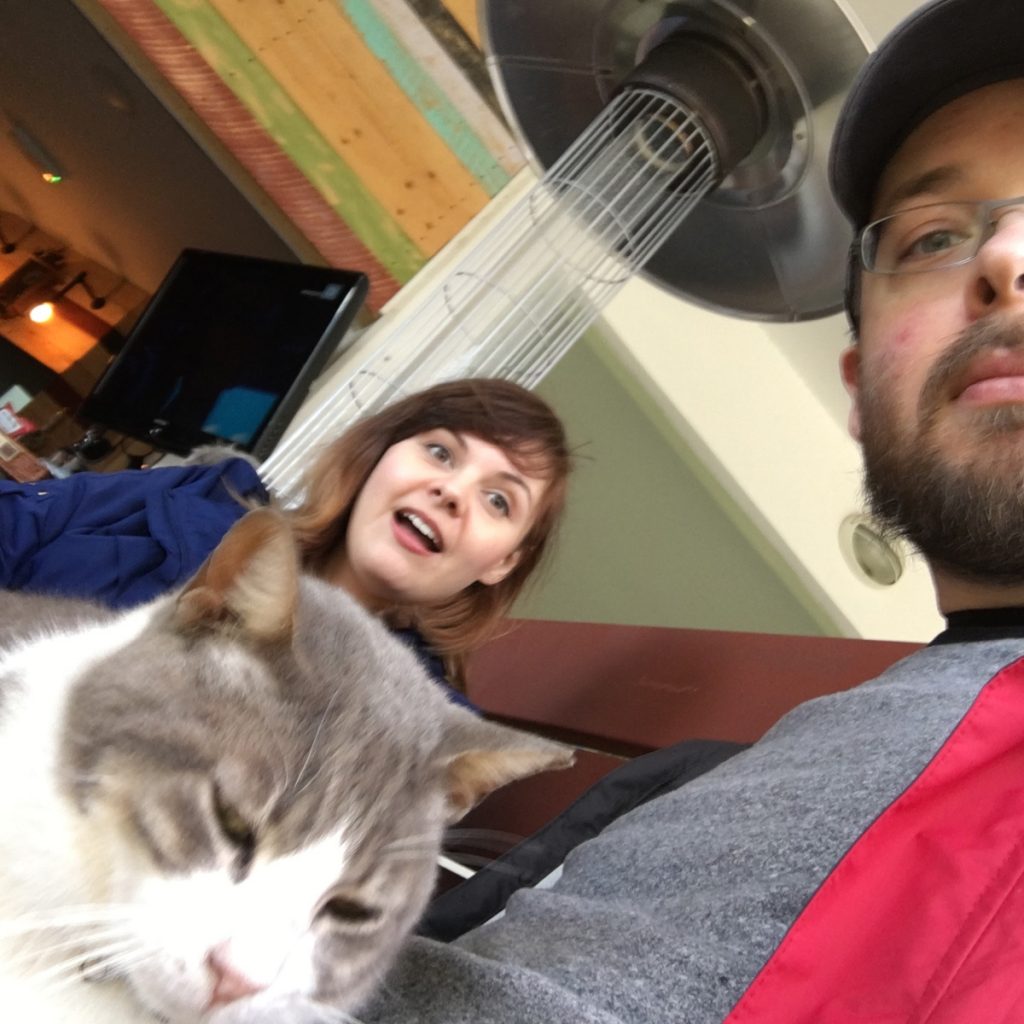 This is my last post about Cyprus! I had an incredible time in this country and I truly hope to return some day. I found the people to be kind and the atmosphere to be relaxed.

Onward to Athens, Greece! I’m looking forward to being in a large city and experiencing Greek culture.