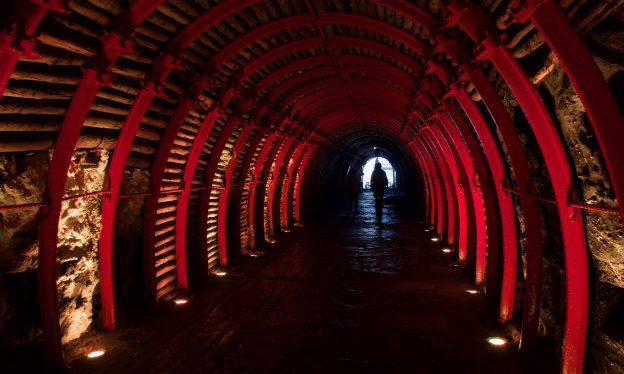 The second half of our stay in Bogotá felt more settled and comfortable. I had my favourite coffee spots, fav empanada joint, fav craft beer bar, and even navigated the Transmil during rush hour. Basically a Bogotana!

We settled in but still got up to a few more touristic things too. We made it outside of the city to a small town, Zipaquirá, to see the Catedral de Sal. It’s this amazing former salt mine that’s been converted into a vast Cathedral deep underground.

I found the Cathedral quite amazing and overwhelming. Despite the gigantic open caverns within the mine I still felt incredibly claustrophobic. I couldn’t stop thinking about being underground. It’s dark, there is a smell of sulphur, and it keeps getting warmer the further down you go. We explored for about 2 hours and that was more than enough for me. I would make a terrible miner.

As for the Cathedral aspect, I don’t believe in any omnipotent beings but I could imagine what it would be like to believe in something that grand. Going to this place to pray, to think about life and your place in it and having to stare into these large dark caverns. I think it’s quite profound.

The town of Zipaquirá was really lovely too. Such a chill vibe compared to the big city and we had some really delicious food there.

We also took in the really stunning collection at the Botero Museum in the Candelaria neighbourhood of Bogota. The collection ranges from many of Fernando Botero’s work throughout his lifetime and many European post impressionist paintings as well as some sculpture. The museum is in an old colonial building that connects a coin museum and Colombian art gallery to the Botero museum. A perfect place to spend a day.

After the museum we explored the Candelaria neighbourhood a bit more. We found a delicious supper at the “Gris Gatto”, walked some of the adorable cobble stoned streets, and were searched by the Policia. That’s right! I think we were standing in one spot for too long and looked a bit suspicious. John got a pat down and my purse was searched for drugs. The Policia who was searching me inspected all the candy in my purse, which was a lot and I thought it was funny. He tried to search all the pockets of my purse, but happened to miss the pocket that I actually keep my drugs in! I keep a butt load of allergy meds on me, plus my epipen that they might’ve found interesting. I was embarrassingly delighted that I looked cool enough to have any sort of contraband on me.

On our very last day we made a trip over to the Botanical Gardens in Bogotá. It was a perfect peaceful activity to finish our month up in the city.

Then finally we had to pack up all our things and head to the airport. Where we had a nice Colombian style breakfast and many coffees! My breakfast was beans and rice topped with two eggs with a side of fried plantain and of course, arepas.

We ended up spending 8 hours at the airport because there were city wide protests planned for that day and the protests were planning on blocking all major roads. So we went super early then our flight was delayed due to some maintenance issues! We got to Lima 2 hours late but arranged for a car pickup in Lima which made our lives stress free. Highly recommend.

In conclusion, Bogotá is a really interesting city and if you ever head to Colombia I think it’s worth your time to take in the city and not just head to the beautiful touristic towns. Bogotá has an incredible variety of people and things to do. The people are cautious of outsiders but at the same time they are warm and welcoming. The only major downside is that Bogotá will take your breath away, literally, with the high altitude and pollution.