Getting to Know Lima 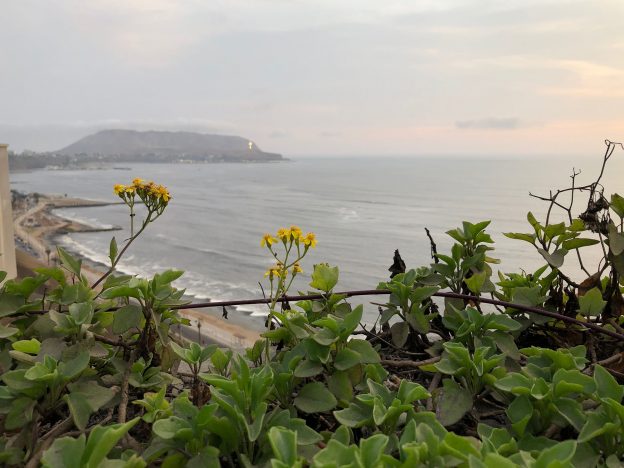 After spending 3 weeks in Lima, I feel like I got to know the city a bit better. Not completely, I mean can you ever really “know” a city but I definitely felt acquainted with the bohemian Barranco neighbourhood.

We found more cats. Turns out they aren’t just in parks but also on the rooftops of bars and houses.

OMG the food! Please visit Peru if you’re even slightly in love with food. They really got something good going on. Ceviche made with Peruvian limes is so amazing. I tried to make my own, but my timing was off to do it with fish so I used mangos. It turned out pretty good, but I should’ve added more aji peppers! FUEGO!

Chifa is another world of Peruvian food. There are like a million places. It’s Chinese food made by immigrants who were shipped over for cheap labour after the abolition of slavery. Primarily of Cantonese heritage, they wanted to make their own food from home, but only had Peruvian ingredients resulting in delicious Chifa. We only tried a few dishes because it’s mostly meant for large families to sit down and share, but I totally loved it. Just make sure you don’t have to do anything after because you won’t be able to move and will probably need a nap.

We made it to a few museums and an archaeological sight. I really enjoyed the Pedro de Osma Museum, It’s in this beautiful colonial era mansion that you get to wander around in. The day we went it was completely empty so I didn’t feel rushed or crowded by other people. The MATE wasn’t really my cup o’ tea. The MATE is all about Mario Testino and his high end fashion photography which, in my opinion, is ridiculously over airbrushed sensationalized and idealized female forms. He’s all about motion and action in his photos, but the polished humans he chooses to photograph aren’t particularly interesting to me. I did enjoy his photographs and exhibit about traditional Peruvian costumes. Still, very posed but more interesting for sure.

We made it downtown! I know it took us long enough, but we did it and it was fun. There was a Christmas and/or bicycle related event going on so all the streets were shut down for pedestrians. amazing.

We went to the main square ate some things and checked out the Catacumbas del Convento de San Francisco. Super cool church and catacombs. We weren’t allowed to take photos, but I took sneaky ones when nobody was looking. I’m v good at sneaky.

Lima is a culturally rich and a stunningly beautiful place to visit. I’m really glad I got to live in the city for 3 weeks. I understand some neighbourhoods are less safe than others, but I felt completely at ease in Barranco (still forever cautious though).

I found a lot of cool street art in Barranco. Truly beautiful and if I ever make it back to Lima I’d like to explore more of it.

In Barranco and Miraflores the local people are very accustomed to having visitors and don’t make you feel like a complete alien while walking around. As fascinating it is to feel like a minority… like an outsider, it’s definitely not the most comfortable way to be. I know that generally people are just curious and don’t mean anything hurtful by their attitude or staring and I think for me as a white person it is very good for me to even be able to glimpse at what it’s like for Canadians or visitors to Canada who are a visible minority. I know it’s not the same. Just be aware when you’re treating someone differently because of appearance. TINY RANT OVER.

In conclusion, Lima has the best food and I love the chill beach vibes.

Next up is an amazing mountain adventure in Cusco, Sacred Valley, and Machu Picchu!

About 10 months ago · reply · retweet · favorite

About 3 days ago · reply · retweet · favorite